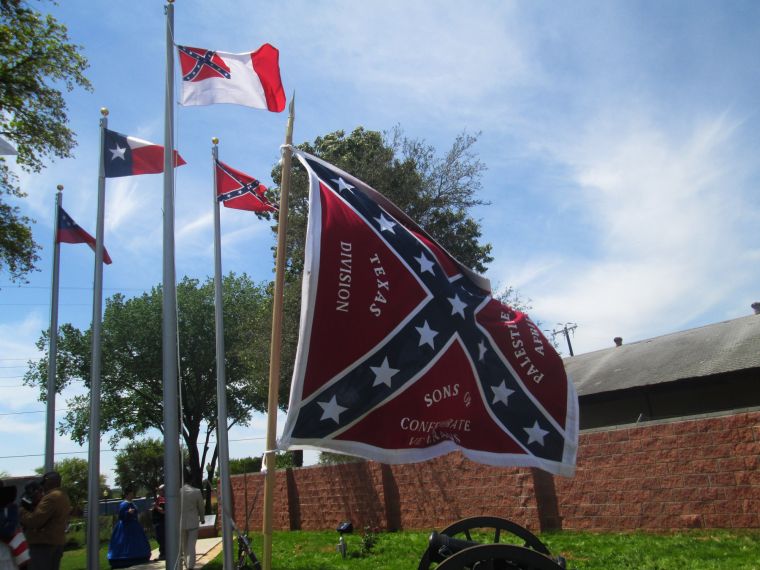 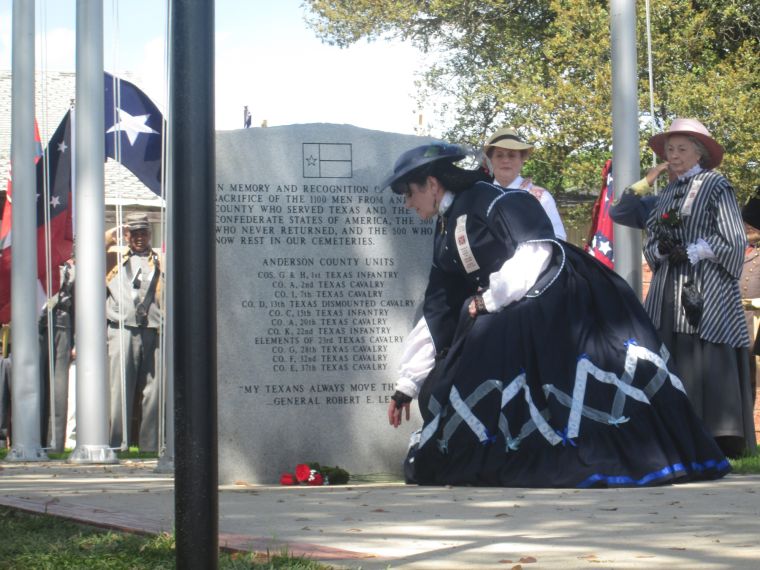 Ladies from the Texas Order of the Confederate Rose place roses at the foot of the monument during the dedication ceremony for the John H. Reagan Camp No. 2156's Confederate Veterans Memorial Plaza Saturday in Palestine, Texas. 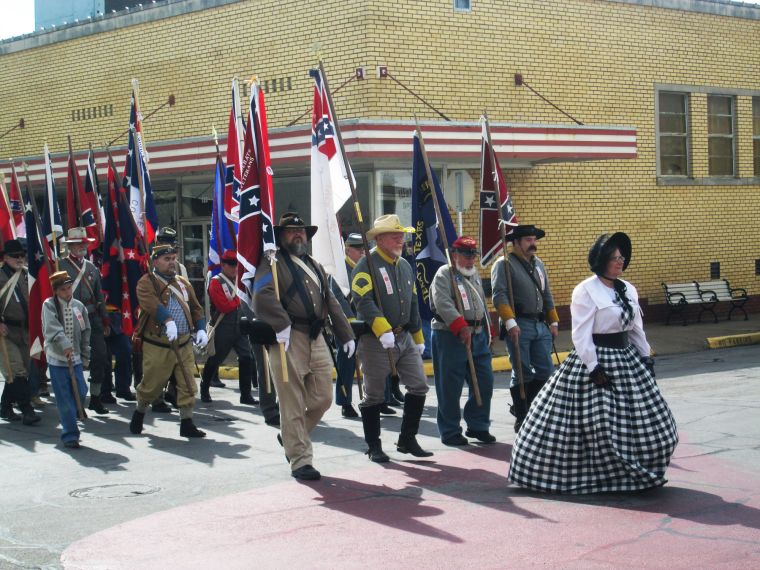 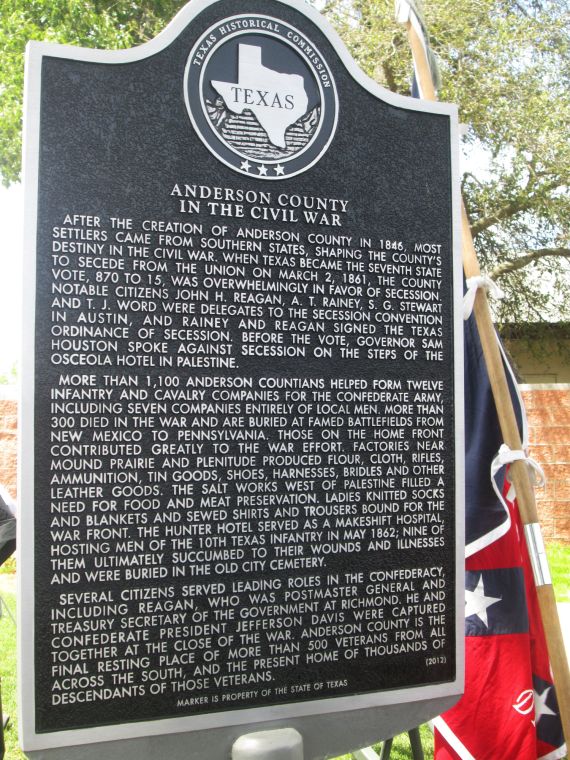 Ladies from the Texas Order of the Confederate Rose place roses at the foot of the monument during the dedication ceremony for the John H. Reagan Camp No. 2156's Confederate Veterans Memorial Plaza Saturday in Palestine, Texas.

The plaza will serve as a permanent place of honor and remembrance for Confederate veterans from Anderson County, the State of Texas and across the South.

With representation from the SCV’s regional, state and national organization, the local camp raised five flags for the first time, including the Texas state flag surrounded by the first, second and third national flags of the Confederacy, along with the Confederate battle flag.

Ironically, one of the flags raised during the ceremony Saturday was the same flag that raised a controversy in April 2011 in Palestine and prompted the local group to build a plaza.

“However, four days later we were forced to take it down. They told us it didn't belong on city or county property. Many thanks for giving us a great idea,” John H. Reagan Camp No. 2156 SCV Commander Dan Dyer said during the ceremony. “Apparently they thought that would be the last time they heard from the John H. Reagan Camp… but that's not in our Southern DNA.”

The controversial flag that garnished state and national media attention in 2011, was locked away, according to Dyer, and brought out Saturday for the ceremony.

Though the event was devoid of any protests, local law enforcement including the Palestine Police Department, Anderson County Sheriff's Office and the Texas Department of Public Safety stood on vigil in case of an outbreak of any form of violence.

Watching the ceremony from a distance, Texas NAACP President Gary Bledsoe was one of a handful of people who spoke out Saturday against the idea of opening a Confederate Veterans Memorial Plaza, especially on a site some locals allege is the location of a former “hanging tree,” according to the black community's oral history.

However, some local historians dispute this, saying the tree on the plaza property is not old enough for this to be true.

“We know there are many good people here in the Sons of the Confederate Veterans but in their national organization some of the people in authority are listed by the Southern Law Center as having positions with hate organizations. It's also regretful that they have chosen this particular site to put their plaza. It's truly provocative that they chose this site where the black community believes is the site of a hanging tree,” Bledsoe said.

Palestine resident Versalean Logan said she has long heard of a “hanging tree.”

“It's a very painful part of my heritage and to be informed this lot where the plaza is located could have been the place where many hateful things happened makes it a sad day in Palestine today,” Logan said.

“I believe this will have a domino affect as there is another dedication planned soon in Orange, Texas,” Hardy said. “I think it gives them the opportunity to broadcast and share a message reflecting hate and to flat out disrespect African American heritage and their suffrage by blatantly using a flag that is a symbol that is offensive to many. I feel like they turned back the clock on the progress that had been made here.”

Daniel Davis Clayton, state chair of the Texas Coalition of the Black Texas Democrats agrees, not happy about the location of the plaza in particular.

“What I see here today is a claim of heritage and a demonstration of hate,” Clayton said.

Officers and members of the Sons of Confederate Veterans, the United Daughters of the Confederacy, and the Order of Confederate Rose from across Texas and other states were in attendance to dedicate the memorial plaza.

A Texas Historical Marker also was dedicated, noting the contributions of Confederate veterans from Anderson County.

Reagan Camp former commander Ronnie Hatfield read a poem “Do You Know Me?”

John H. Reagan Camp members Rudy Ray (along with his wife Teri) and Doug Smith sang the Confederate song “The Wearing of the Gray.”

The ceremony ended with the singing of “Dixie.”

Featured in the parade, which started at the Anderson County Courthouse and ended at the Confederate Veterans  Memorial Plaza were horses, cannons and reenactors in Confederate infantry, cavalry and artillery uniforms. The parade also featured ladies in period attire, SCV “mechanized cavalry” on motorcycles and more.

Included in this memorial plaza will be memorial brick pavers engraved with the names of veterans along with their rank and unit.

One may honor a Confederate veteran by having the name, rank, and unit of the soldier inscribed on a memorial brick paver in the plaza. Forms are available at www.reaganscvcamp.org.

Read more in the Tuesday edition of the Palestine Herald-Press. View related photos online at www.facebook.com/palestineherald.com