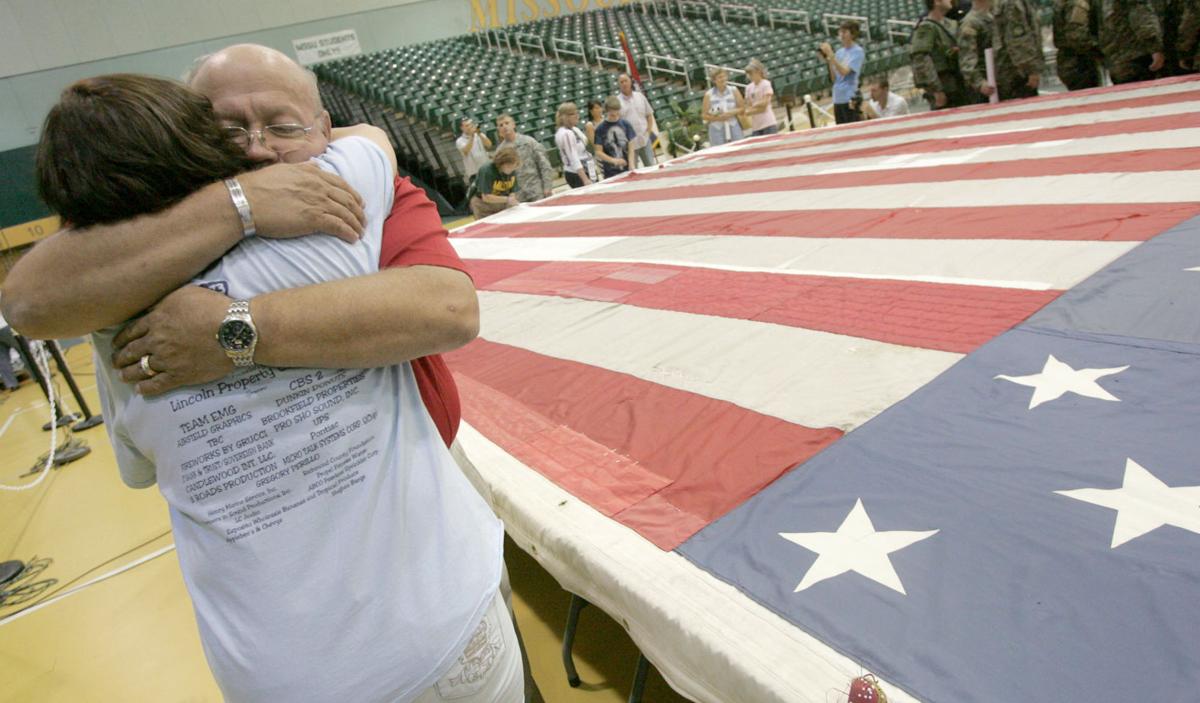 FILE — Denny Deters, Glenwood, Iowa, embraces Holly Vitchers, New York, on Sunday afternoon. It's the end of a long journey for Deters, who is in charge of flag restoration and protocol for the National 9/11 Flag. He has traveled to 41 states with the flag. 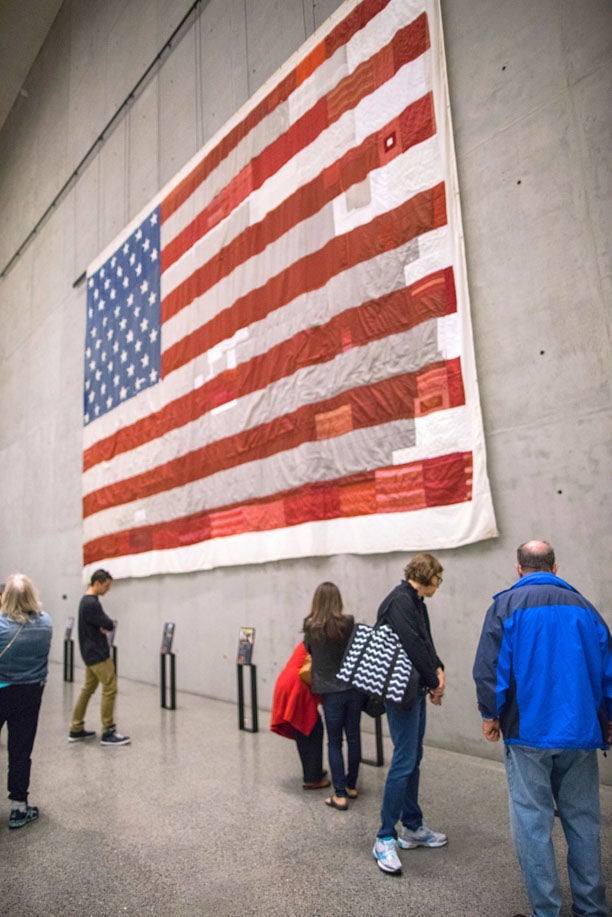 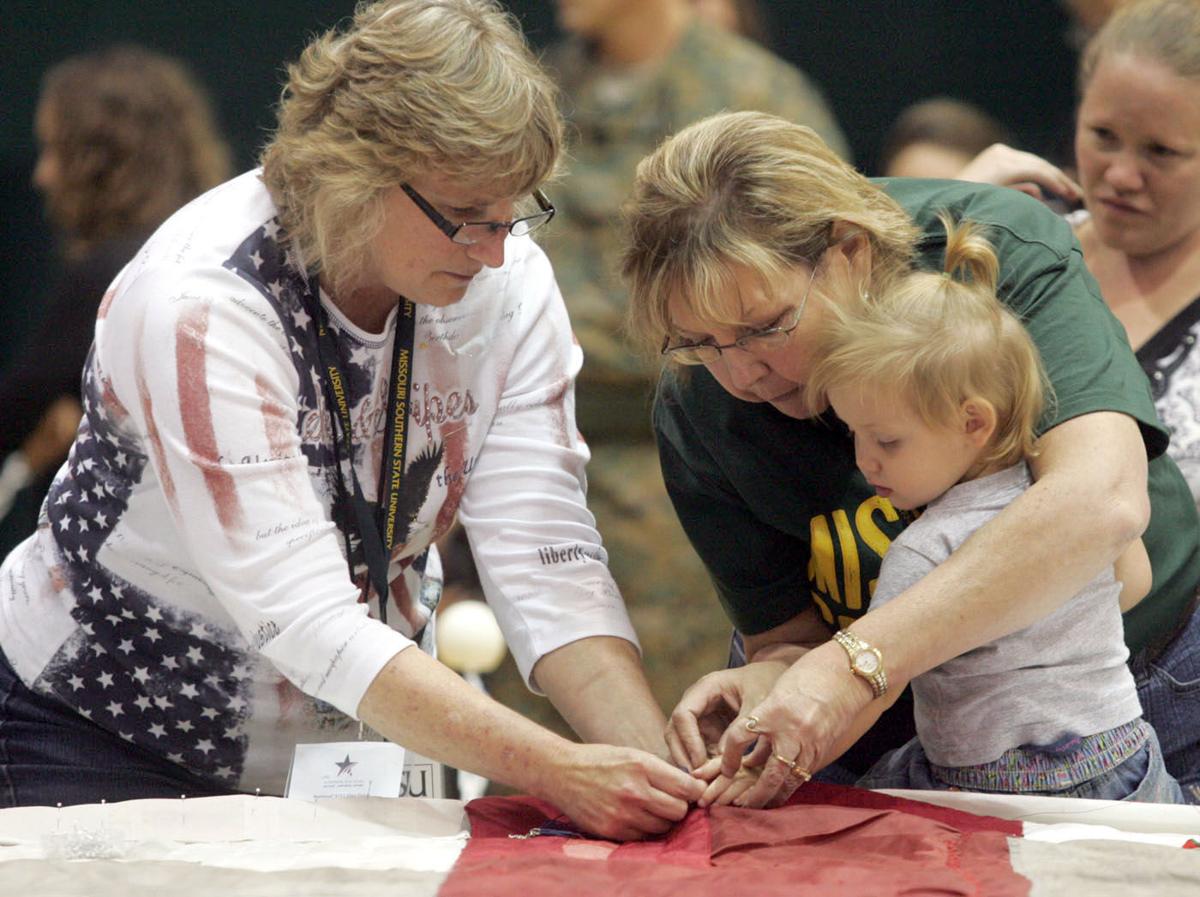 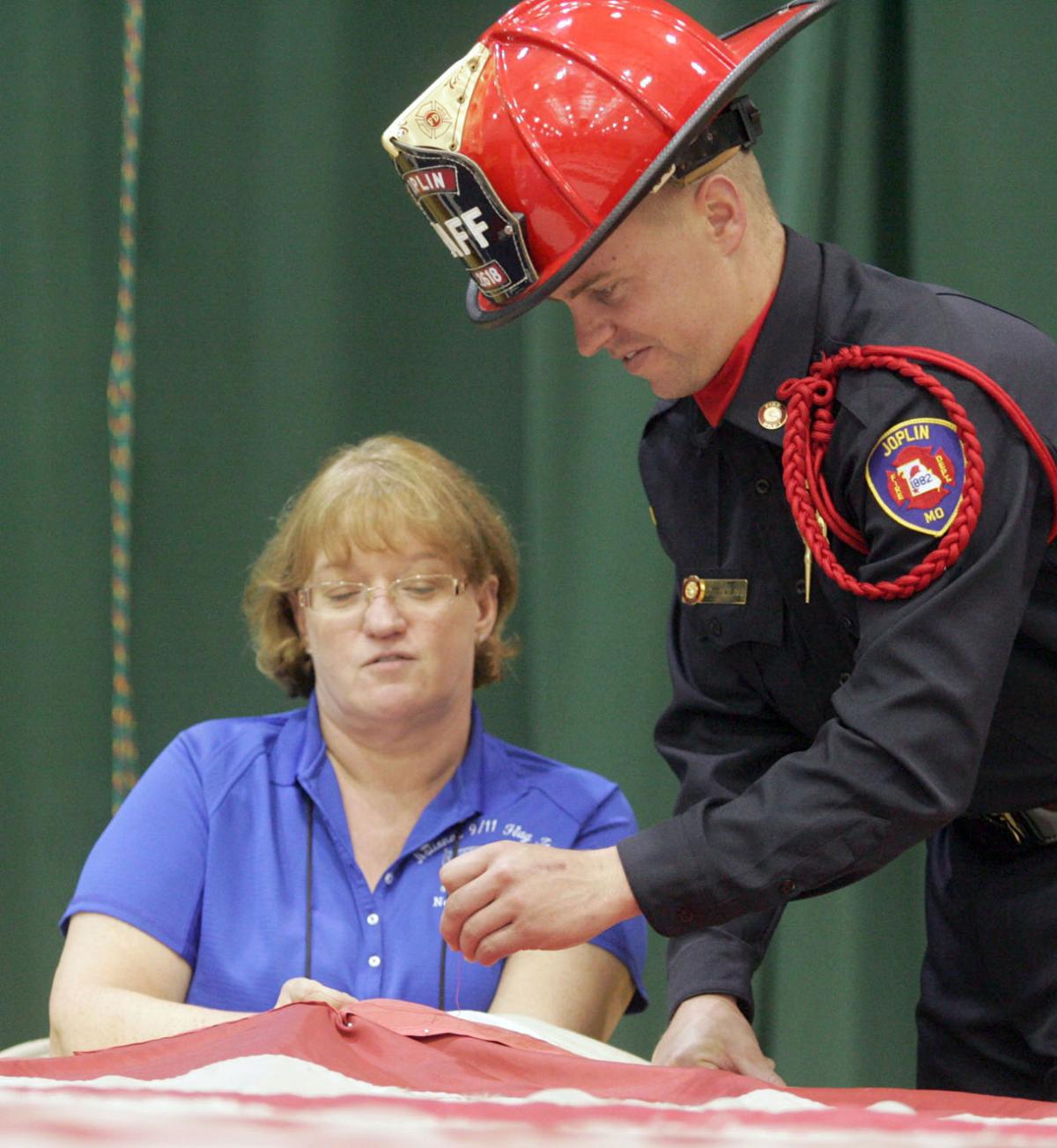 FILE — Denny Deters, Glenwood, Iowa, embraces Holly Vitchers, New York, on Sunday afternoon. It's the end of a long journey for Deters, who is in charge of flag restoration and protocol for the National 9/11 Flag. He has traveled to 41 states with the flag.

She was only 6 years old at the time, but she recalls going to Missouri Southern State University with her family, where a giant American flag was stretched inside the gymnasium. She remembers stepping up to the edge of the flag and, with a volunteer's assistance, leaving a small stitch in it.

"It was an awesome experience," said Brooklyn, now 10 and a student at Soaring Heights Elementary School.

That flag, which has become known as the National 9/11 Flag, opened Thursday in its new display at the National September 11 Memorial and Museum in New York City. The exhibition marks the end of a 14-year journey for the flag that included an emotional, poignant stop in Joplin just months after the devastating EF-5 tornado of May 22, 2011. The display also opened the day before Joplin marks the four-year anniversary of the tornado that destroyed a third of the city, killed 161 people, injuring thousands and leveled some 8,000 homes.

The flag was destroyed in the aftermath of the terrorist attacks of Sept. 11, 2001, according to the New York Says Thank You Foundation. Survivors of the 2007 Greensburg, Kansas, tornado began stitching it back together seven years later, and a nationwide campaign to restore the 30-foot flag was launched.

The flag has since been stitched by schoolchildren and soldiers who survived the shooting at Fort Hood, Texas; by World War II veterans on the deck of the USS Missouri in Pearl Harbor; by the family of Martin Luther King Jr.; by 20 members of Congress at the U.S. Capitol; and by thousands of servicemen and servicewomen across the country.

The flag also includes a piece of the flag that Abraham Lincoln was laid on when he was shot at Ford’s Theater as well as threads from the original Star-Spangled Banner flag that flew at Fort McHenry during the War of 1812 and served as the inspiration for Francis Scott Key to compose the national anthem.

The final restorative patches were sewn into the flag by more than 1,000 tornado survivors during a public stitching ceremony in Joplin on Sept. 11, 2011 — the 10th anniversary of the terrorist attacks in New York, and just four short months after the May 22 tornado.

Brooklyn and her mother, Shiela Immesote, had attended Joplin's stitching ceremony in search of healing following the tornado, during which they had been trapped inside the Walmart Supercenter on 15th Street.

"What I remember for us is that it was an honor that we were still here to be able to do that, mainly because we could have easily been taken away that day in the Walmart," Immesote said. "It actually still gives me chills when I think about it."

Immesote said she and her daughter "still have our moments" when bad weather hits. Moving on from the tornado and its devastating effects has been difficult, she said, but made somewhat easier through efforts such as the flag-stitching ceremony and the Stars of Hope campaign, another initiative of the New York Says Thank You Foundation.

"We're not ever going to forget (May 22), and so being a part of the 9/11 flag and Stars of Hope was a huge healing process for Brooklyn and myself," she said.

Sandra Lovett, a grant writer for Missouri Southern who helped organize the stitching ceremony, said the event helped Joplin residents connect with the nation. Prior to the stitching ceremony, the flag also had been part of an equally emotional vigil at Cunningham Park, overlooking the ruins of the former St. John's Regional Medical Center, that marked the 2001 terrorist attacks, she said.

"I think it was very important for us as a community," she said. "At that point, we were still reeling from the tornado. I think it was huge for those of us who were at Joplin's Ground Zero at the same time that New Yorkers were at their Ground Zero."

Lovett recalls putting a stitch in the flag with her granddaughter Anabelle Engh, who was about 18 months old at the time. She said Anabelle, who will head to kindergarten in the fall, is still too young to know much of the events of either 2001 or 2011, but she will likely learn in time.

"I think that will be a very important piece of history for her to know that she actually has a stitch in the flag," Lovett said.

Kolby Tucker, a driver/engineer with the Joplin Fire Department, had helped stitch the flag after being part of the Honor Guard that transported it from Cunningham Park to Missouri Southern.

"I think all of us will tell you it (Sept. 11, 2001) was the reason we became a firefighter, so it was pretty neat to be part of something like that," he said.

Tucker, who was with Riverside police officer Jefferson Taylor when he was struck and killed by lightning in the aftermath of the tornado, said that although much work remains to be done, Joplin has come far since May 22, 2011.

Funeral service for Kiara Raelyn Yarbrough, 26, who died on Janunary 1, 2021 in Dallas will be Saturday at 10 a.m. at Memorial Cemetery. Burial to follow in Memorial Cemetery in Palestine, Texas. Funeral arrangements will be handled by Emanuel Funeral Home of Palestine.

Services for Virginia Eleanor Kinart, 94 of Elkhart are pending with Bailey & Foster Funeral Home. Mrs. Kinart passed away Wednesday, January 13, 2021 at her home.