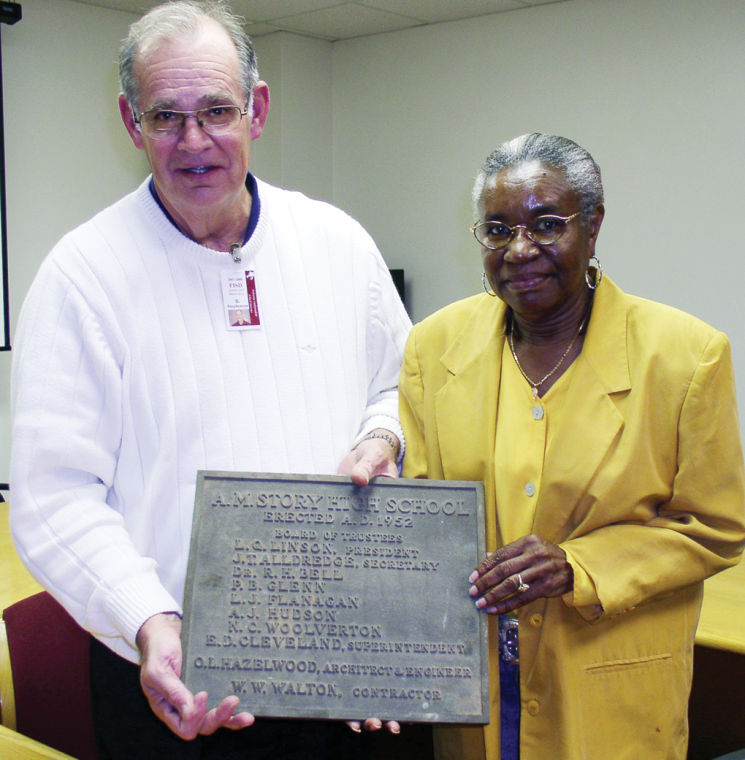 Bob Stephenson, left, a former Story School principal, and Story HIgh School graduate Sammie Gaston, right, hold the Story School’s 1952 dedication plaque that was recently returned to the school by a local metal recycling company. The plaque was lost over 20 years ago when the school was destroyed by a tornado. According to Palestine Independent School District Superintendent Jerry Mayo, the plaque will be dedicated back to the school in a future ceremony. 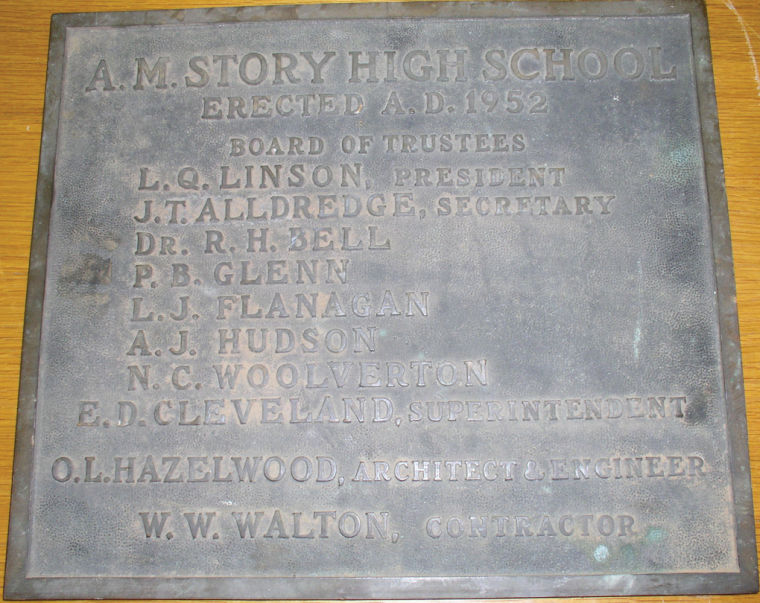 A close up of the 1952 Story High School dedication plaque donated back to PISD after 20 years.

Bob Stephenson, left, a former Story School principal, and Story HIgh School graduate Sammie Gaston, right, hold the Story School’s 1952 dedication plaque that was recently returned to the school by a local metal recycling company. The plaque was lost over 20 years ago when the school was destroyed by a tornado. According to Palestine Independent School District Superintendent Jerry Mayo, the plaque will be dedicated back to the school in a future ceremony.

A close up of the 1952 Story High School dedication plaque donated back to PISD after 20 years.

In November of 1987 the city of Palestine was devastated by a destructive tornado. Taking the brunt of the storm’s damage was Palestine Independent School District, whose A.M. Story School was destroyed beyond repair. Just over 20 years later, a piece of that fallen school’s history was recovered in the form of the 1952 A.M. Story High School dedication plaque which hung at the front entrance of the building. PISD Superintendent Jerry Mayo reported that about a month ago he received a call from Robert Douglas, the facilities director at Recycle Me, a local recycling company. “A homeless man had sold them the plaque, and they wanted to return it to us,” Mayo said. “We offered to pay them for their cost, but they refused and graciously donated the plaque back to us.” According to former Story principal Bob Stephenson, who served as the campus principal at the time of the tornado, the bronze plaque was located at the front of the building near the entrance to the office area. “Now that I see it I can remember it clearly,” Stephenson said. “I saw it everyday as I walked in and out of the building.” Stephenson and Mayo suspect the dedication plaque was lost, not in the tornado itself, but in later cleanup efforts. “We think that it was demolished with the part of the building that was left standing and taken to a local landfill,” Mayo said. “How it made its way into the hands of homeless man and then back to us, we don’t know. “It is just amazing to us.” The A.M. Story school that was destroyed was originally dedicated in 1952 as A.M. Story High School, the black high school erected before desegregation came to Palestine in 1967. Another part of the building was dedicated as Washington School, the district’s black elementary school. “Under president Harry Truman’s separate but equal law, the district had to build a new school for its black students,” Mayo said. “Also at that time, both the black and the white schools were under one school board, which was a little unusual.” Names on the plaque include the superintendent at the time, E.D. Cleveland and well as the board of trustees, including: board president L.C. Hinson, board secretary J.T. Alldredge and board members Dr. R.H. Bell, P.B. Glenn, L.J. Flanagan, A.J. Hudson and N.C. Woolverton. A junior at the time of the school’s dedication was Palestine’s Sammie Gaston, a current PISD aide who has worked in the district for 32 years. “Jimmie Cummings, a longtime PISD educator was part of the school’s first graduating class,” Gaston recalled. “We were proud of that school. It had inside bathrooms, which was really something. “It was really a big step for us.” When Stephenson, who is currently an assistant principal at Palestine High School, first eyed the plaque last week, it brought back a flood of memories associated with the tornado’s destruction of the school. “It was a Sunday and one of the teachers, Debbie Lawrence, called to tell me she had some work to do at the school and wanted me to let her in,” Stephenson said. “I remember telling her I would come at the half-time of the Cowboys game and go back after she left to set the alarms. “It had already started hailing by the time I got back home from letting her in the school, and I remember being upset that the storm had knocked out the cable so I couldn’t finish the game,” he said. “About 30 minutes later, Mrs. Lawrence contacted me and told me the school was gone.” Lawrence was in the school building at the time of the tornado, but fortunately was in a part of it that was untouched by the damage. The office where the plaque hung was about the only part of the building that was still standing, Stephenson explained. It jutted out of the building with classrooms on either end. “Mrs. Lawrence said she had gone to the office to make a phone call, opened the door to leave and saw the sky,” Stephenson said. “It was amazing that she was not hurt.” Cleanup of the school site began almost immediately, the principal recalled. “The National Guard arrived that evening to guard the site and protect citizens from being hurt by the rubble,” Stephenson said. “They remained there a couple of days.” Inmates from TDCJ also were shipped to the site almost immediately to help with cleanup. “About 70 or 80 inmates, with almost the same number of guards, worked for just a few days and had cleaned up a majority of the debris by Friday,” Stephenson said. “They loaded everything that was salvageable onto large trucks, which Wal-Mart and Central Freight allowed us to use.” To house the almost 600 fourth and fifth grade students and teachers, three local churches — First Baptist Church, Southside Baptist Church and First Presbyterian Church — offered their facilities for use by the district. “We used the old Beall’s for a little while and then, of course, the old Kroger building that is now the courthouse annex,” Stephenson said. “I remember chasing pigeons out of the building.” While the original Story School building is long gone, and the land where it stood sold and out of district hands, the plaque itself remains a symbol of PISD’s history — of segregation, destruction and of a community coming together out of hard times. Mayo said the district has plans to have the plaque cleaned and rededicated to the current A.M. Story School very soon. He hopes to recruit school alumni and others to participate in the event. “I can still see that plaque on the wall as I go in the door,” Gaston said. “I am sure glad it was found and returned to us. ———— Mary Rainwater may be reached via e-mail at mrainwater@palestineherald.com

James L. Bailey of Palestine died Saturday September 19,2020 at the age of 88. Funeral Services will be Sunday, September 27,2020 at 1:00 pm at the Emanuel Funeral Home Chapel in Palestine Tx. Rev. Melvin Hill Sr. will be the eulogist. Burial will follow at the Mt. Zion Cemetery in Brushy Cr…

Memorial service for Billy Bruce Brice, 72, of Palestine will be Saturday, October 3,2020, at 2:00pm at the Palestine Airport. Arrangements are under the direction of Herrington/Land of Memory. Billy died September 1,2020. View online at www.herringtonfuneral.com

Susan Tobias, 66, of Palestine passed away September 23,2020. Services are 3:00pm Monday, September 28,2020, at Herrington/Land of Memory. Burial will follow at Broyles Chapel Cemetery. Visitation is 1:00pm-3:00pm prior to the funeral service. View online at www.herringtonfuneral.com.