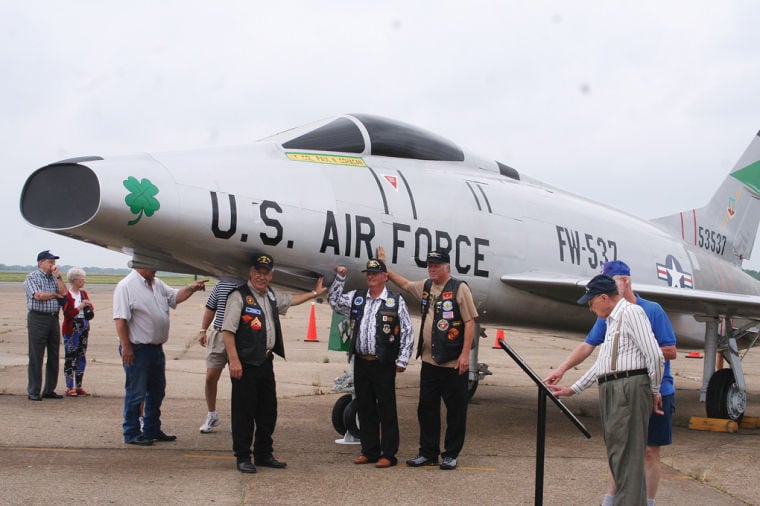 Vietnam veterans and other visitors examine and take photographs by an F-100A Super Sabre jet following a dedication ceremony for the jet in honor of the late Lt. Col. Paul M. Cohagen Saturday morning at the Historic Aviation Memorial Museum at the Tyler Regional Airport. 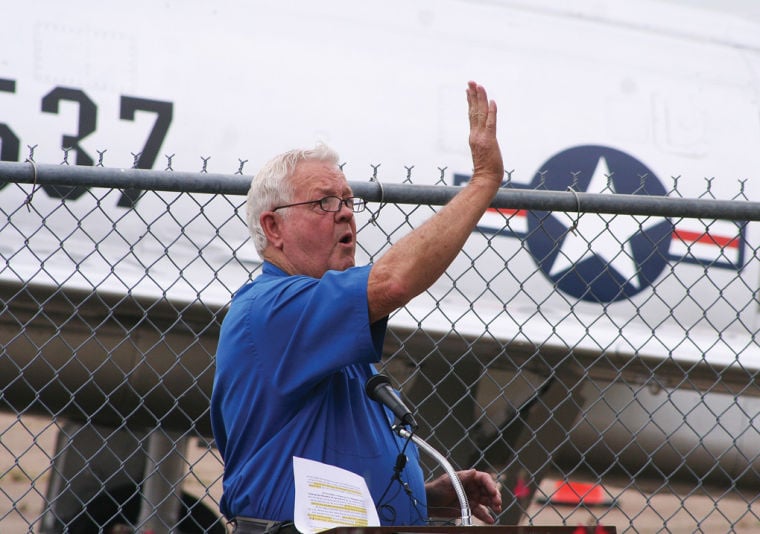 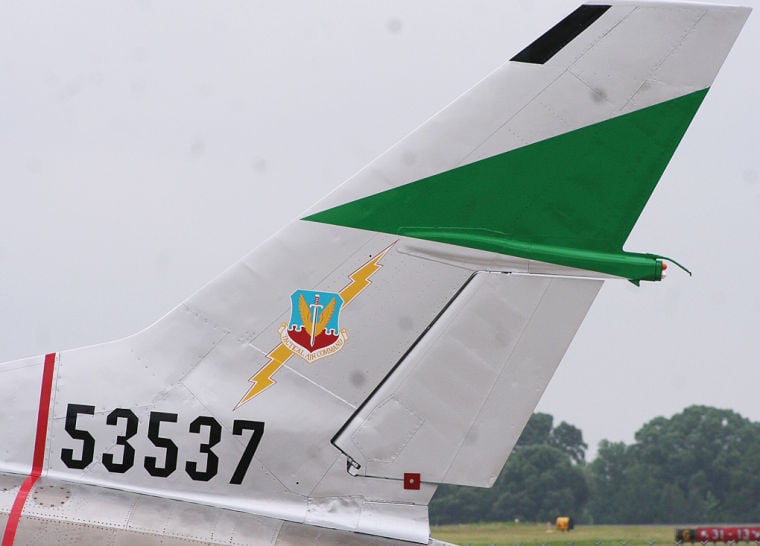 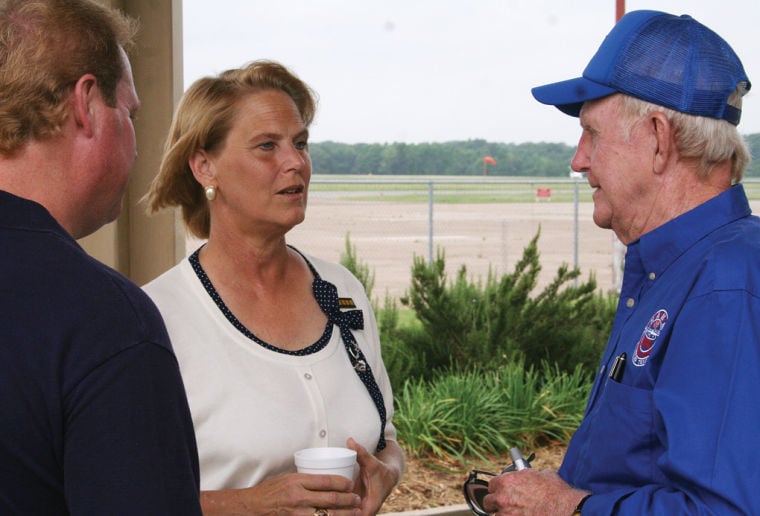 Joe Coleman, left, and wife Anne Coleman talk with an official with the Historic Aviation Memorial Museum at the Tyler Regional Airport following the conclusion of a ceremony dedicating an F-100A Super Sabre fighter jet to the museum in honor of Anne Coleman’s father, the late Lt. Col. Paul M. Cohagen, on Saturday morning.

Vietnam veterans and other visitors examine and take photographs by an F-100A Super Sabre jet following a dedication ceremony for the jet in honor of the late Lt. Col. Paul M. Cohagen Saturday morning at the Historic Aviation Memorial Museum at the Tyler Regional Airport.

Joe Coleman, left, and wife Anne Coleman talk with an official with the Historic Aviation Memorial Museum at the Tyler Regional Airport following the conclusion of a ceremony dedicating an F-100A Super Sabre fighter jet to the museum in honor of Anne Coleman’s father, the late Lt. Col. Paul M. Cohagen, on Saturday morning.

TYLER — As a child, Anne Coleman’s hero fit the hero mold — a good guy, someone who would teach the things children needed to learn, a man who soared higher and flew faster than the rest. Her hero was her father, the late Lt. Col. Paul M. Cohagen who flew F-100A Super Sabre fighter jets for the United States Air Force, state-side and over Vietnam, while Anne was a child growing up on airbases. Cohagen continued to fly planes until a year before his death in 2005, capping a 61-year run as a pilot which began when he was 12 years old in 1943. Saturday morning, Coleman honored her father’s Air Force service by dedicating an F-100A Super Sabre in his memory to the Historic Aviation Memorial Museum at the Tyler Regional Airport. The museum is located in the old Pounds Field terminal at 150 Airport Dr. Seeing the restored jet sitting on the tarmac outside the museum, with her father’s name painted under the canopy, a four-leaf clover on the nose and his number “537” on the tail, was emotional. “It’s chilling to me,” Coleman said after the ceremony. “I used to wake up to these aircraft taking off when we lived on base. They would scream right over our windows every day, along with the F-4s. Then my dad went overseas to Vietnam. That was a tough time. “He was pretty much my hero, he really was. He was a good guy. He was a good teacher. He loved to teach.” During the dedication ceremony, museum official Bill Halbert talked about the history of the F-100 while in service for the Air Force and Kenneth Toby discussed Cohagen’s years as a pilot. In addition, John Mustard, director of aircraft maintenance for the museum, spoke about the plane’s restoration and what the various decals and paint represented. Coleman, however, declined to speak during the ceremony and instead greeted friends and well-wishers before and afterwards. “It’s pretty emotional,” Coleman said. “That’s why I didn’t speak, not on this subject.” Palestine resident Reba Hayes, who drove to Tyler to attend the ceremony, said she was thrilled to see a local family honored for their service to country. “I think it is the most tremendous thing to happen to our community, to know we had a hero who participated and that his daughter and son cared enough to do this for him,” Hayes said. The project began in earnest when friends called to say an F-100A had been located in San Antonio at Lackland Air Force Base, Coleman said. The Air Force granted permission and access to the base for the plane to be removed for restoration and display at the museum. Last summer, the plane was disassembled and trucked, with the help of a crane operator and HeHaul Trucking in Buffalo, from San Antonio to Tyler in pieces — the fuselage and wings separate — where it was re-assembled and restored over a five-month period. “These folks know what they’re doing. They’re very professional,” Coleman said, adding, “This was a joint effort. The Historic Aviation Memorial Museum is really dead center.” The job wasn’t as bad as with other planes, Mustard said. “It had a lot of layers of paint,” said Mustard, who oversaw the restoration process at the museum. “We sanded it down to the original paint job. Once we found it was solid and would stay, we painted it.” Workers primed it and painted it silver, Mustard said, and the detailed stickers were recreated and applied. “The biggest thing was finding the details,” Mustard said. “The TAC (Tactical Air Command) symbol on the tail was the most difficult. “This was a simple restoration. This airplane is in good shape.” The plane joins others of the “Century Series” at the museum, including an F-104 and F-105, as well as an F-4 which Mustard said was thought to have been labeled an F-102 before the Air Force changed to the F-4 name. “We’ve got a lot of jets but I don’t know of many museums with all of the 100s,” Mustard said. “Probably just the military museums.” The museum is open from 1 p.m. to 5 p.m. on Sundays and from 10 a.m. to 5 p.m. Tuesday through Saturday. Admission is $5 for adults, $4 for active military, $3 for ages 13-17 and free for ages 12 and under. For more information, call 903-526-1945 or 903-526-1939, or visit the museum’s Web site at www.tylerhamm.org. ———— Beth Foley may be contacted via e-mail at bfoley@palestineherald.com ———— On the Net: Historic Aviation Memorial Museum, http://www.tylerhamm.org