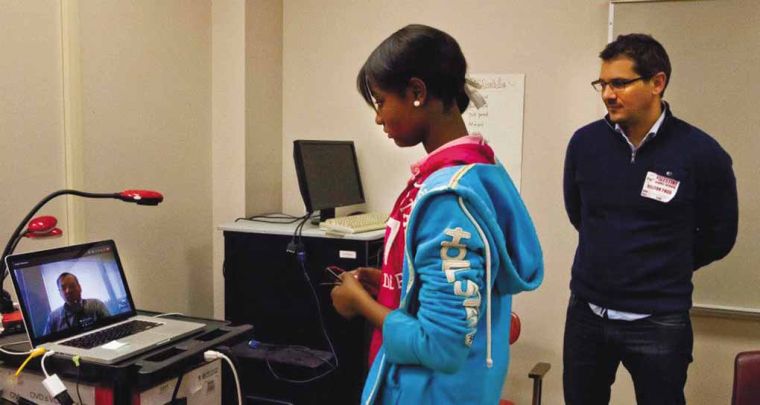 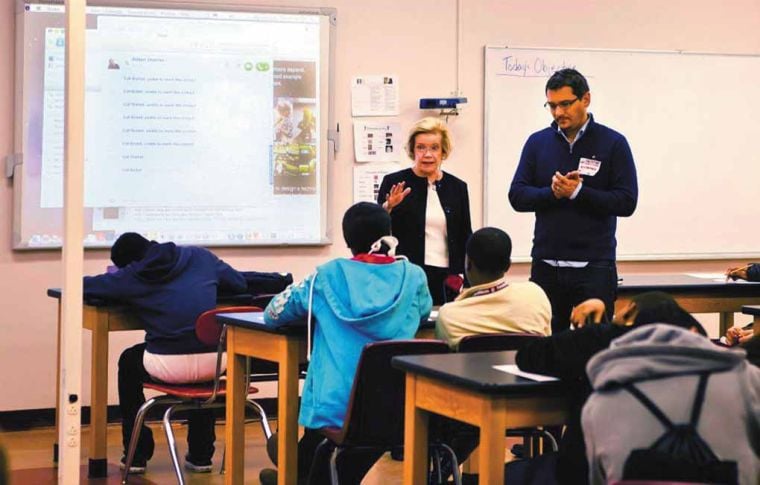 It’s not every day that middle school students get a chance to talk to NASA engineers — learning about space exploration to Mars in particular.

The Imagine Mars project is a national arts, sciences and technology education initiative, where students, scientists and civic leaders are working to design a sustainable Mars community.

“In general, I’m here to help get the students thinking about the constraints of living on Mars, what the atmosphere is like, for example, and then connect them to scientists and engineers so they can ask questions to real people who are working in their field, many of them at the top of their field,” Delgado said during a special reception hosted by the Palestine Area Chamber of Commerce, which helped bring the pilot program to Palestine ISD.

One of those experts was NASA JPL systems engineer Rob Sharrow who via Skype was able to answer individual students’ questions, which mainly touched on Mars’ atmosphere and the design of the Mars rover.

Students learned the reasons behind the Mars rover design — such as why it had to be large enough to get over the huge rocks on Mars and tough enough to endure the coldness of Mars, which on average is about -81 degrees F (-62 degrees C).

One of the student’s questions was: How long can the Mars Rover stay there?

Delgado explained that the Mars Rover has to be able to endure being on the planet for a minimum of two years.

“We are in the same solar system, but we are on the inside track and Mars is on an outside track,” Delgado said. “Every two years, we have a window when we are closer to Mars. Some day maybe we will have the technology where we can go to Mars at any time, but right now we have to use our window of opportunity.”

In fact, the Mars Rover Curiosity left Earth right after Thanksgiving and will not make it to Mars (a 352-million-mile trip) until summer.

Delgado explained to one student that because she was 15 years old she had been around the sun 15 times.

“If you lived on Mars, you would only be 7 years old, because in that time Mars would have only went around the sun seven times,” Delgado explained. “That’s why the need to be there at least a minimum of two years has to become a part of the design process.”

Another student asked why Mars was chosen over other planets.

“We have sent an orbiter to Jupiter and plan another one to go to Pluto,” Delgado said. “But it only takes us 8 1/2 months to get to Mars. It would take 5 years to go to Jupiter.”

While answering questions from students, Sharrow also explained how the Jet Propulsion Lab scientists and engineers work together on large teams to build things such as the Mars Rover.

Every part, for example, for the Rover has to be made custom and must be built to withstand extreme environmental conditions, lots of vibration and radiation.

Many times, the creative thinking the students are encouraged to use in the Imagine Mars project comes into play.

Delgado brought up the scenario where two pieces of material teams made for the Rover don’t work together as planned.

“We may be close to launch and don’t have time to start over,” Delgado explained. “The more and more constrained we are time-wise, the more and more creative we are about solutions to find a way around it.”

Even before a mission is even planned, the scientists and engineers work on a theoretic plan on what they would like to do in space.

“What kind of mission do we want to do? We will say we have this really neat science we want to do, but there is no way to collect the data. We may have to build a new device to get the data,” Delgado said.

Students also watched an animation video of how the Mars Rover Curiosity will land on Mars (see link below).

The students were asked write down three interesting things they learned from the program as well as two things they came up with for their own inventions for their Imagine Mars project.

Presley encouraged the students to use carbon fiber in their inventions, a new material currently being used that is strong but super thin.

While this is the first year that Palestine ISD has participated in the Imagine Mars education initiative, Presley has brought the project to a few other school districts including Tyler ISD and Aldine ISD and has trained teachers across the state.

When bringing the pilot program to Palestine, Palestine Middle School art teacher Lori Comacho and science teacher Lisa Covington were first sent to the MIT Playful Invention and Exploration training Sept. 20-23 in San Francisco. At the training, the participants were immersed in TEKS-based STEM (Science, Technology, Engineering and Mathematics) phenomena and thinking strategies that promote discovery and problem-solving through experimenting and designing. The idea is to integrate creative thinking and state-mandated curriculum to prepare tomorrow’s leaders. The Imagine Mars Project is just one of the ways ICEE Success is bringing the art-science interface and creative thinking skills to local students.

Cecil Bernard Taylor, age 85, of Palestine, passed away on Wednesday, the 28th day of October 2020. He was born on the 27th day of May 1935, in Falls County, Texas, to parents John Carlton Taylor, Sr. and Ethel M. Taylor. Mr. Taylor was a loving family man who took great pride in the family …