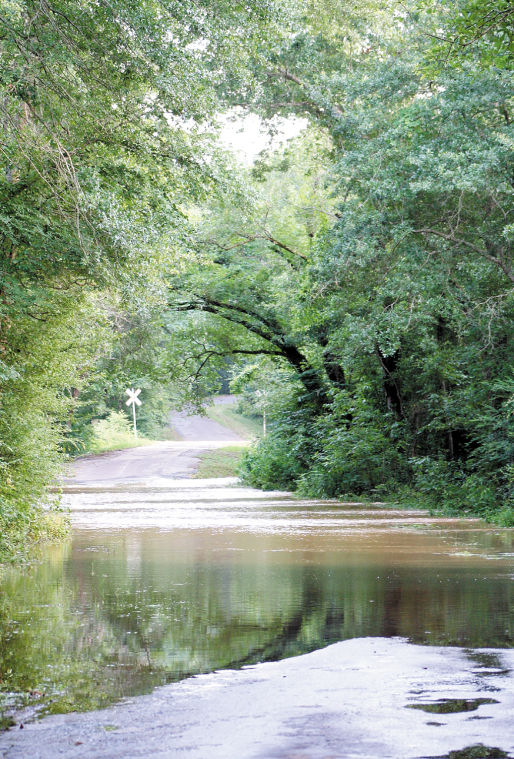 High water from Stills Creek flows over ACR 1232 just north of where the Texas State Railroad crosses the road. Both ACR 1229 and ACR 1232 are located off U.S. 84 east of Palestine. 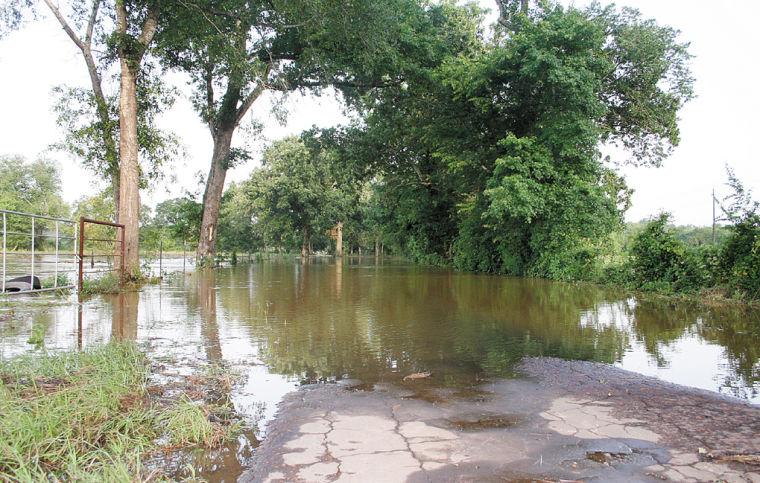 High water from Stills Creek flows over ACR 1232 just north of where the Texas State Railroad crosses the road. Both ACR 1229 and ACR 1232 are located off U.S. 84 east of Palestine.

While other areas in Texas have been inundated with rainfall, Anderson County has been relatively lucky so far. According to measurements taken daily at the city water plant on ACR 3722, Palestine received 1.58 inches of rain during the 24-hour period ending at 7 a.m. Wednesday, bringing the June total to 6.47 inches. Wednesday’s reading marked the 10th day this month that rain was recorded at the water plant. Rainfall amounts varied, depending on location. According to AccuWeather, which uses rainfall measured at the Palestine Municipal Airport, the city had received .58 inches of rain on Tuesday, bringing it to 3.88 inches of rain during June and 22.96 inches so far in 2007. National Weather Service meteorologist Joe Harris in Fort Worth said Wednesday morning that according to radar estimates, the city of Palestine had received between 1.5 and 2 inches of rain since Monday morning, while areas further south in the county had received between 4 and 5 inches during the two-day period. While conditions around Anderson County had not become wet enough by 11 a.m. Wednesday for the Texas Department of Public Safety to have to close any roads, local law enforcement officials were keeping a close watch on the skies, rivers and creeks. According to the NWS Web site, the Neches River at U.S. 79 near Neches was at 14.03 feet, more than two feet above its flood stage of 12 feet. The river is expected to crest at 14.8 feet sometime today. Likewise, the Trinity River at U.S. 79 near Long Lake was approaching its flood stage of 35 feet, with a reading at 10:30 a.m. Wednesday of 34.44 feet. The Trinity is expected to crest at 39.3 feet on Monday. Anderson County Sheriff Greg Taylor said Wednesday morning that deputies were beginning to patrol low-lying areas around the county known to be prone to flooding, in keep an eye on conditions. At that point, the only road Taylor said that he’d heard about with flooding problems was FM 861 just south of Elkhart, which was under about 6 inches of water. Around 7:30 p.m. Wednesday, at least two more roads — Anderson County Roads 1229 and 1232 — had high water from a flooded creek flowing over the surface. Taylor urged caution for anyone living around or driving through low-lying areas. “People that live close to the rivers and close to creeks need to be careful,” Taylor said. “If you can’t see the road, don’t drive through it. “People need to pay attention to the weather and the roads.” Taylor also asked that anyone who sees roadways or homes threatened by rising waters report the location to the sheriff’s office at 903-729-6068 or call 9-1-1 in an emergency situation. ———— Beth Foley may be contacted via e-mail at bfoley@palestineherald.com