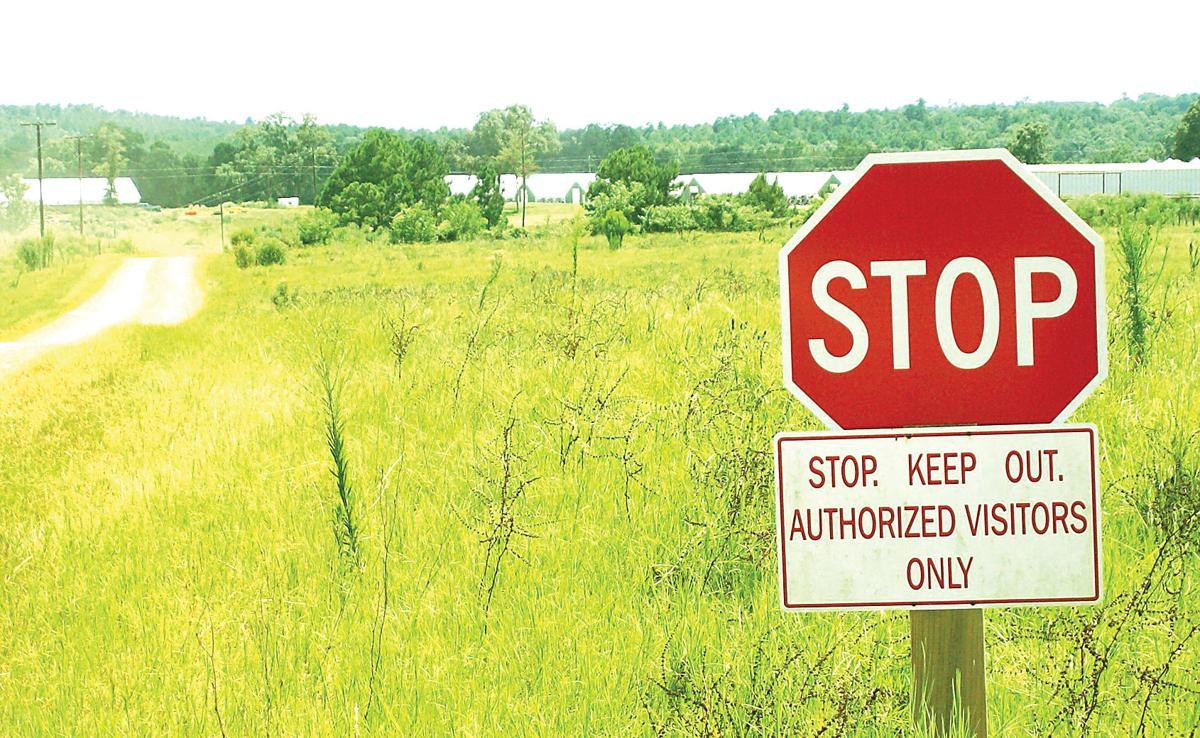 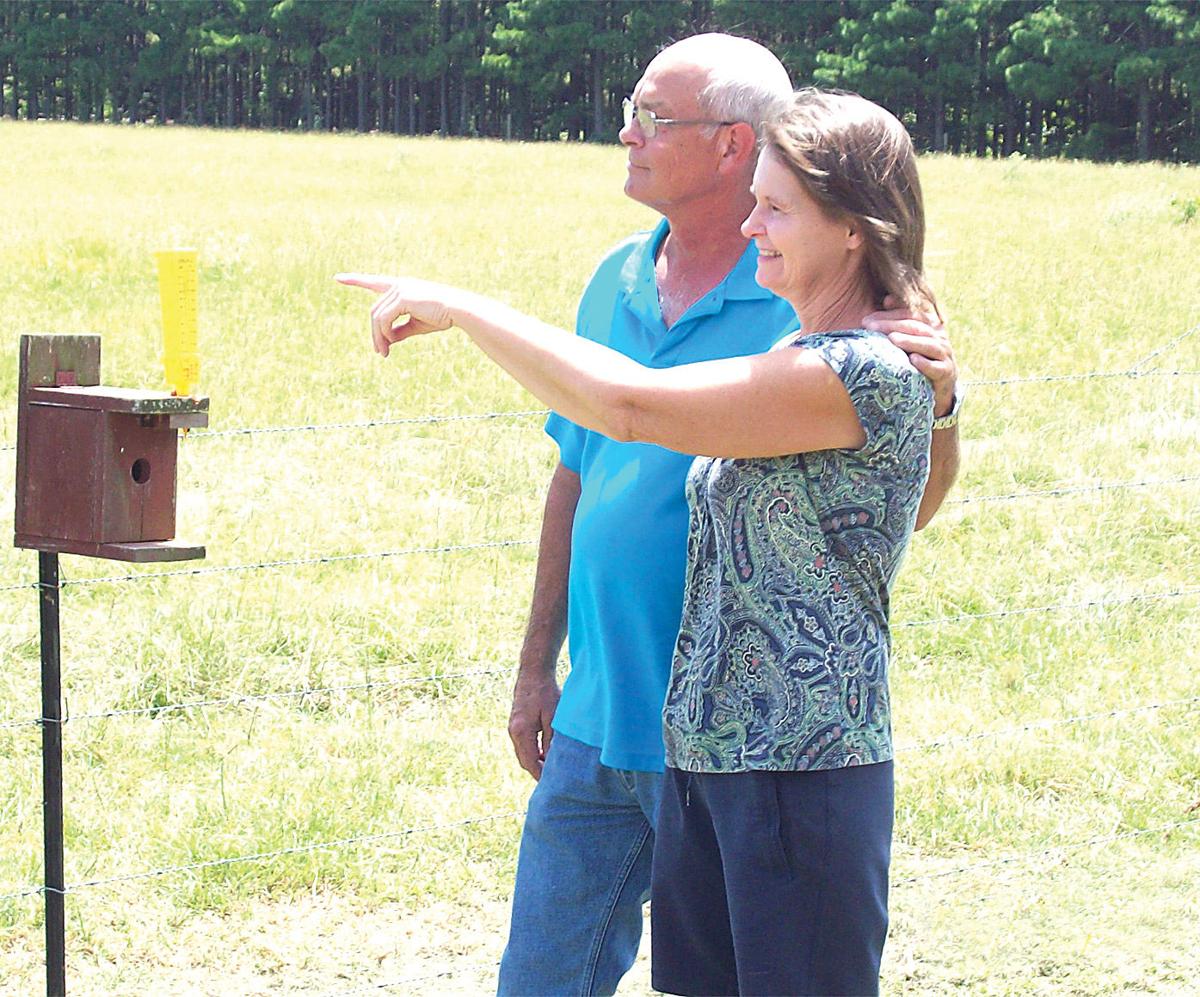 Residents Ricky and Rhonda Naismith point towards the source of the odor.

Residents Ricky and Rhonda Naismith point towards the source of the odor.

Texas is currently ranked sixth in the nation for poultry production. Thanks to Sanderson Farms, Anderson County has become a vital part of that.

The growth, however, has come with at least one downside for some area residents who live near the farms, five miles east of Palestine: the smell of chicken manure and waste products.

“Sometimes the smell is almost particulate,” said Ricky Naismith, whose home is roughly 2,500 feet west of the farms. “You can almost taste it.”

Naismith and his wife, Rhonda, said the smell comes from chicken coops owned by Luong's Farm and P & D Farm. Both operations are under exclusive contract with Sanderson Farms to produce chickens.

This is not the first time a contract farm with Sanderson Farms corporation has been accused of polluting the Texas environment.

In 2009 and 2010, the Texas Commission for Environmental Quality investigated similar complaints against farms in Mexia, Texas, that were contracted to supply the company's Limestone County facilities. The investigations resulted in two TCEQ orders directing the chicken producers to clean up their act.

TCEQ spokesman Brian McGovern told the Herald-Press that residents with environmental concerns should make formal complaints via its website:

The Naismiths said they can't predict on what days the odor will be strong, but it normally happens several days a week. A Herald-Press reporter last Friday, in the early afternoon, did not detect an offensive odor during the interview.

“It's usually worse in the mornings until ten o'clock, and then it returns in the evening around six,” Rhonda Naismith said.

She said that on Tuesday, July 25, “it was so bad, you couldn't stay outside.”

Her husband said he has spoken with Sanderson Farms several times about the odor. Officials at the plant have been polite, he said, but have done little to alleviate the problem. The smell abated for a week after his first phone call to the company, he said, but soon returned, stronger than ever.

The Naismiths' neighbor had similar complaints.

“I live between Ricky and the plant,” said neighbor Darryl Hortman. His home is roughly 2,000 feet from both P & D and Luong's Farm.

Hortman, too, said the air quality around his property has worsened. “It's random,” he said. “There's no way to predict when it will be just bad or awful.”

Over the past six months, Hortman said his wife has suffered respiratory problems. Although those problems coincided with the odors, he acknowledged that there was “no concrete evidence to tie the two together.”

Even so, the Centers for Disease Control and Prevention in Atlanta cited, in a 2014 article, the proliferation of eye and respiratory illnesses in poultry slaughter and processing facilities.

Sanderson Farms Chief Financial Officer and Media Relations Coordinator, Mike Cockrell, told the Herald-Press that he is concerned how farms contracted by his company operate in their communities. But the grower, he said, is responsible for the air quality.

“The litter belongs to the grower,” Cockrell said when asked about the chicken manure and waste products produced in farms of this size.

Prior to Sanderson Farms entering into a contract with any farm, he said, it “must have a plan approved by the Texas Commission on Environmental Quality, and these farms are ultimately responsible for adhering to these plans.”

Cockrell urges residents with environmental concerns to not only only contact the TCEQ, but also Sanderson Farms. “We want the residents to call us, too,” he said, “so that we can get them the help they need.”

Neighbors of Sanderson Farms acknowledged that it has brought more than 1,000 jobs to Anderson County.

“I'm willing to put up with a little, if it is good for the community,” said Darryl Hortman. Ricky Naismith voiced a similar sentiment, adding, “We just want them to be good neighbors.”

Officials from Luong's Farm and P&D Farm were unavailable for comment.