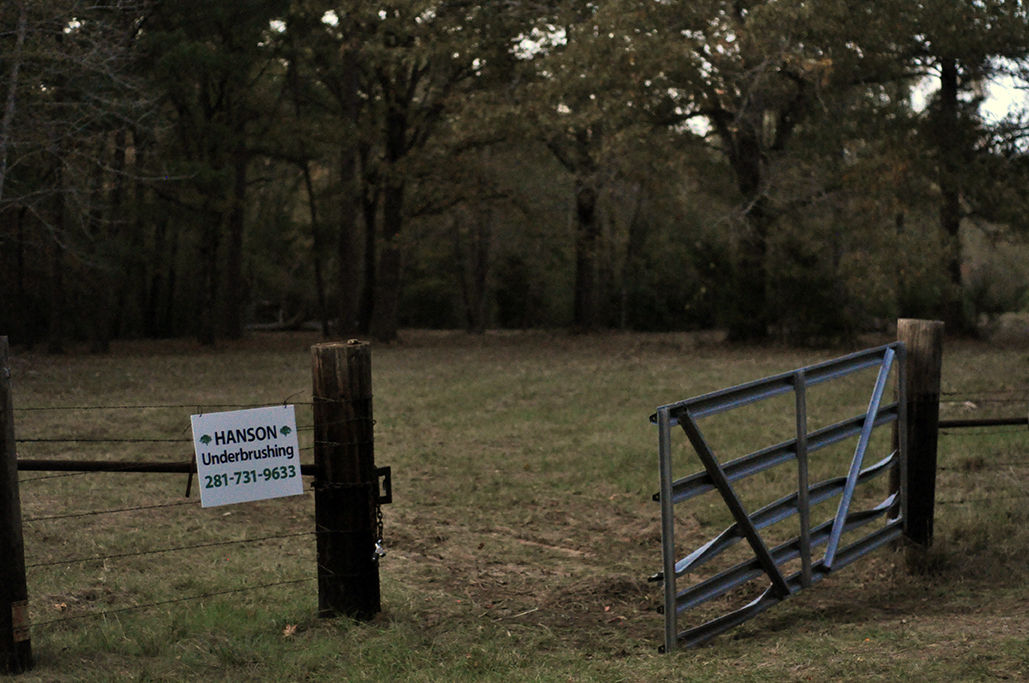 Shown is the gate leading to the victim's property of the recent multiple murders in Tennessee Colony. 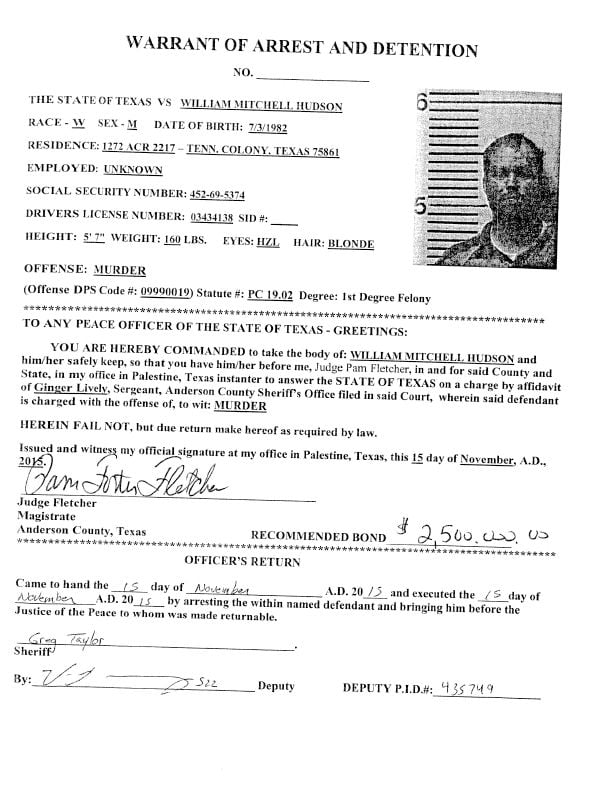 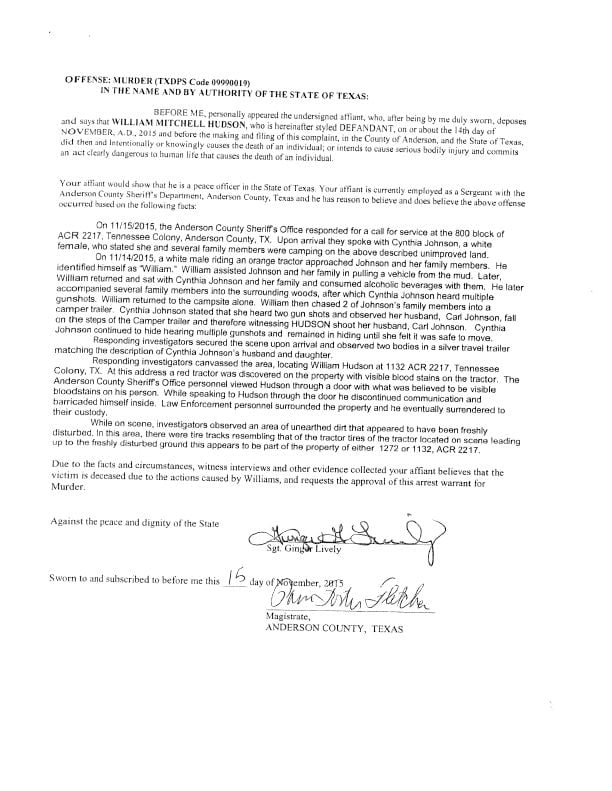 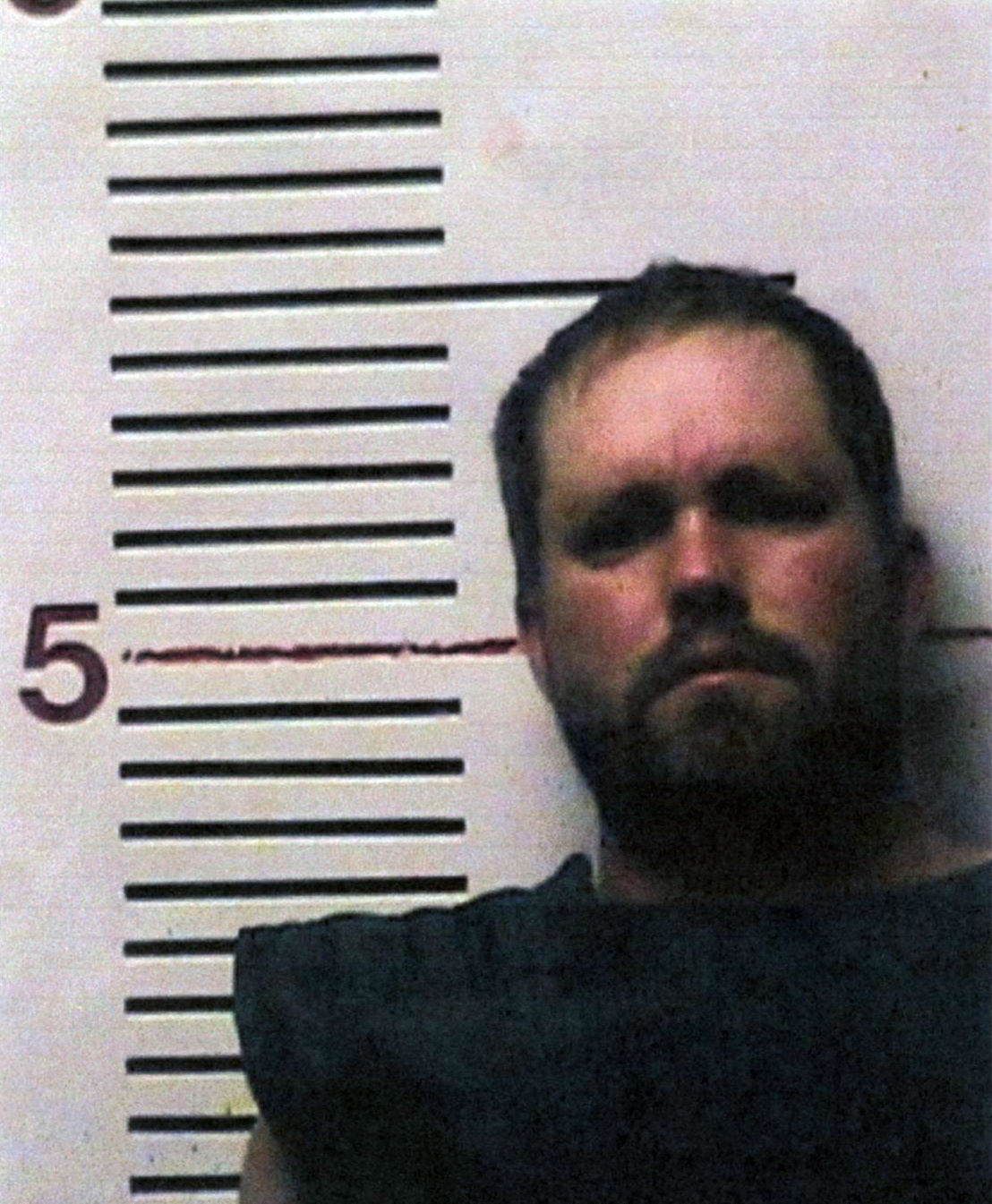 Shown is the gate leading to the victim's property of the recent multiple murders in Tennessee Colony.

The Anderson County Sheriff's Office released the arrest affidavit for the Tennessee Colony murders containing details about the events leading to the deaths.

Caution, this article contains information that may be too graphic for some readers.

The affidavit states William Mitchell Hudson was riding a tractor and approached surviving victim, Cynthia Johnson, and her family to help remove a vehicle stuck in the mud on the victim's property. Later, Hudson returned to the victim's campsite and consumed alcoholic beverages with the family. Afterward, he went with several family members into the surrounding woods. During that time, Johnson reported hearing multiple gunshots. Hudson returned to the family's travel trailer alone, according to Johnson's statement.

Upon his return, Hudson chased two of the family members into the trailer, when Johnson heard two more gunshots. Johnson said she saw her husband fall onto the steps of the camper. Johnson, who was already hiding from Hudson on the property, continued to stay out of sight from Hudson as she heard additional gunshots. She hid until she felt it was safe to move from her position, the affidavit states.

Later she called 911, and investigators responded to the scene to find Johnson's daughter and husband dead inside the travel trailer.

After detectives found Hudson at 1132 ACR 2217, they found a tractor with visible blood stains on Hudson's property. Blood stains were also seen on Hudson.

While investigators were speaking with Hudson, he suddenly stopped talking and barricaded himself inside the residence. Law enforcement surrounded the property, and Hudson eventually surrendered.

Investigators reported seeing an area of unearthed dirt that appeared to be freshly disturbed, according to the affidavit. There were also tire tracks located at the scene leading up to the investigators' discovery.

Frankie (Conley) Morgan, age 86, of Montalba, passed away on Monday, January 10th at Greenbrier Nursing & Rehab Facility. Memorial services will be announced at a later date.