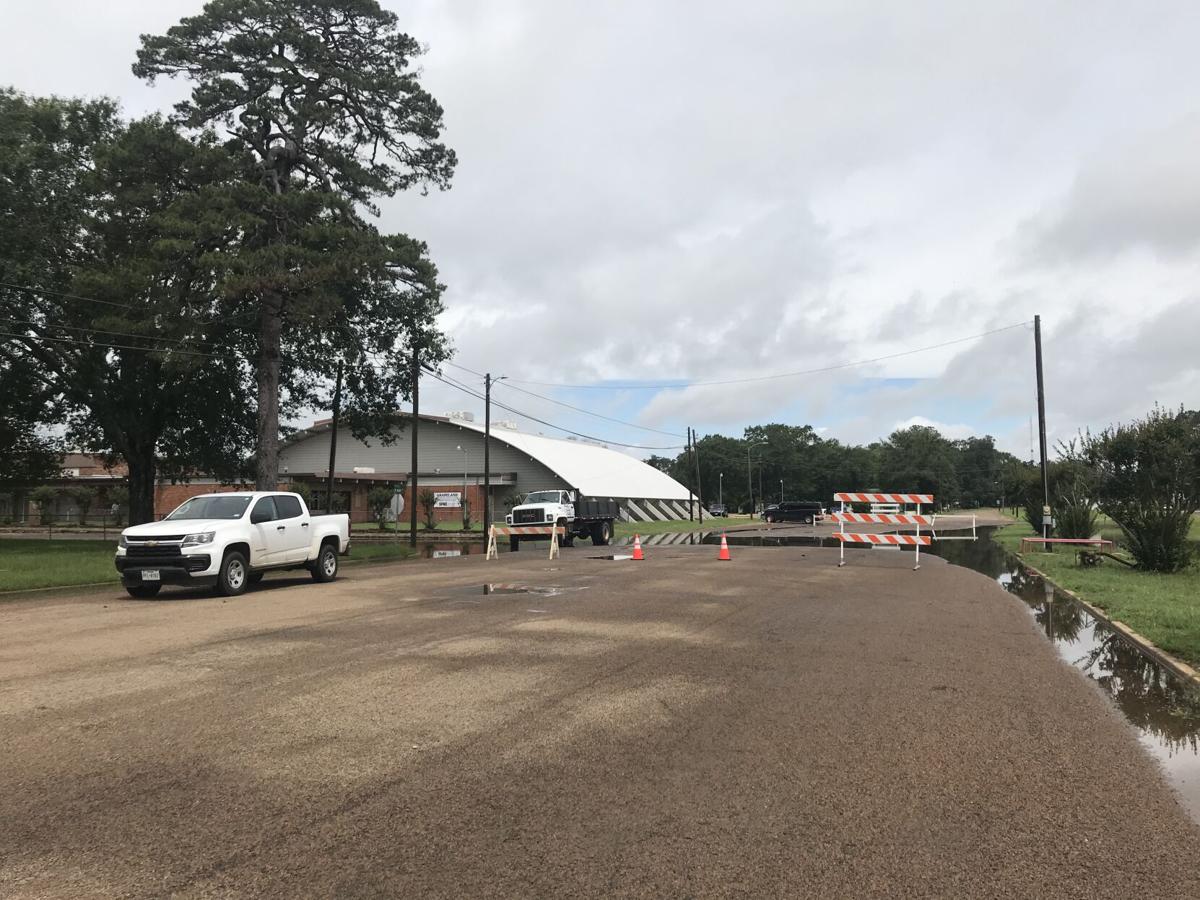 An area of Main Street closed Tuesday morning due to flood waters. 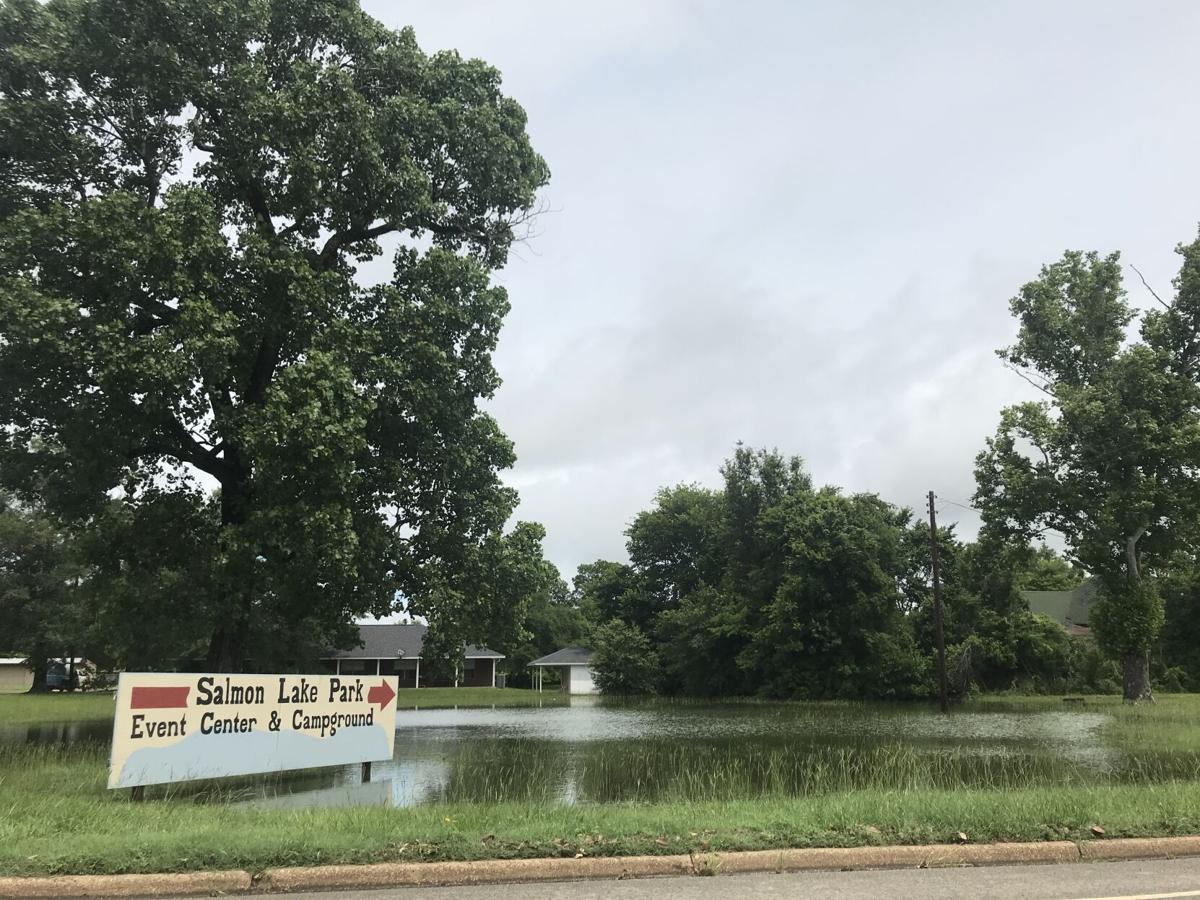 Water stands in ditches and low lying areas throughout the Grapeland community after heavy rainfall in the early morning hours of June 1.

An area of Main Street closed Tuesday morning due to flood waters.

Water stands in ditches and low lying areas throughout the Grapeland community after heavy rainfall in the early morning hours of June 1.

The National Weather Service and local weather stations are reporting that some areas of Grapeland received up to 11 inches of rain overnight.

The NWS reported Houston County law enforcement and emergency crews conducted a swift water rescue, about two miles east of Grapeland, on FM 228 when a car was swept off the road.

Several homes on Olive Street, between the elementary and high school campuses, were also flooded.

Superintendent of Grapeland Schools, Don Jackson, reported there was no damage to the schools or the high school athletic complex located north of town where there was heavy flooding.

Many county and Farm-to-Market roads were flooded and impassable early Tuesday morning.

The Texas Department of Transportation reported the following roads closed:

• US 287 North in several locations

TxDOT said motorist should use alternate routes until the water recedes.

In the city of Grapeland, Mayor Mitchell Woody reported Tuesday morning that everything was okay, but there were a few low lying areas where water is being pumped out.

Woody, a grandson of Floyd Salmon, said he journeyed out to Salmon Lake this morning and was “pretty heartbroken” about what he saw.

Heavy rains caused the dam to break at Salmon Lake around 5 a.m. on June 1, severely damaging areas of the park. According to a post on social media, the water wheel and mill, the "Lemon shine" stand and the bridge were all destroyed and parts of the main stage were damaged. The park is closed to non-resident guests until further notice.

“I think my father would be devastated,” said Carolyn Salmon Kazmierczak, daughter of Floyd Salmon, founder and creator of the park. “I’m thankful my parents didn’t have to go through this or have to endure the burden of having to fix what has been damaged and destroyed. The new owners seem to be holding together.”

According to Kazmierczak, efforts are already being made to restore the park.

“They’ve already had someone come out and give them a quote on fixing the lake,” Kazmierczak said. “Once everything is restored, it’ll only take two days to refill the lake.”

Salmon Lake Park was developed in the 1960s, when Floyd and his wife, Fannie, purchased the 50 acres for the park. Salmon initially built the lake for watering cattle.

A few years later, the couple opened the lake to the public.

Over the years, the family transformed the land into a nostalgic park, filled with old buildings – some dating back to the early 1900s. Many of them have been renovated into cabins and reunion halls.

The park also is filled with Floyd's artistic creations, made from old machine parts.

Long-time park features include the old blue barge with two diving boards, a center lake pier, the playground, the snack shack and the 10-foot water wheel, powering a grist mill, with its gears hidden in a replica of an old man getting spanked by an old woman, as he turns the crank.

In September 1976, the Salmons launched the Labor Day Bluegrass Festival. For more than four decades the couple helped to bolster the community by attracting the biggest names in bluegrass to a four-day festival. Among the attendees were hundreds of grass-roots music lovers who traveled the country to camp out and hear their favorite bands. In 1997, the Salmons began a second bluegrass festival, the Gospel Bluegrass Festival, organized every Memorial Day weekend.

After Floyd Salmon passed away in 2018, the park was purchased by Leah and David Powers, who entered a sale agreement with Trent and Bethany Owens earlier this year.

“This was a catastrophic dam failure,” Bethany said. “We received so much rain, in such a short amount of time the lake did not have the opportunity to recede on its on, and despite our efforts, we anticipated this happening.”

The couple has been told that this was an uninsurable event. Damages have been estimated between $50,000 and $60,000.

Many have already reached out to the new owners to see what type of help they need to get things restored.

“We are so overwhelmed and thankful for all the support we have received,” Bethany said. “But, at this time, we’re not quite sure what we need, but will be letting everyone know how they can help once we have a plan of action ready.”

The park had just hosted a successful Memorial Day Bluegrass Festival, a kickoff to summer for many in the community.

More rain is expected later this week. The NWS is anticipating scattered showers and storms through early next week, with the possibility of some becoming severe. Rainfall totals from two to four inches are expected through Sunday.

According to TxDOT, flash flooding is the leading cause of weather-related deaths in Texas. If you encounter a flooded road, "Turn Around, Don't Drown."

• Never walk, swim, or drive through still or moving flood waters. The water may be hiding dangers such as debris, tree branches, power lines, or damage to the road. As little as six inches of fast-moving water can cause motorists to lose control of their vehicle, even a pickup truck or SUV.

• Stay informed about weather conditions when you are driving.

• Be especially careful driving at night when it can be harder to see flood dangers.

• If your vehicle stalls in deep water, leave it and move to higher ground if you can do so safely.

Texas law is clear on the specifics of encountering flooded roads.

• Never drive around barriers blocking low water crossings or flooded roadways. Penalties include a fine of up to $2,000 and/or up to 180 days in jail.

• Tampering with roadway warning signs or barriers is punishable by a fine of up to $1,000, up to two years in jail, or both.

Services for Terrance Skaro of Elkhart are pending at Bailey & Foster. Mr. Skaro passed away Friday in Tyler.

Terry A. Skaro, 71, of Elkhart went to be with his heavenly Father on Friday, June 11, 2021. He passed away at Trinity Mother Frances in Tyler, Texas. Terry was born in Denver, Colorado on December 17, 1949. His parents Ed and Mary Skaro. He was a member of First Baptist Church in Elkhart, T…