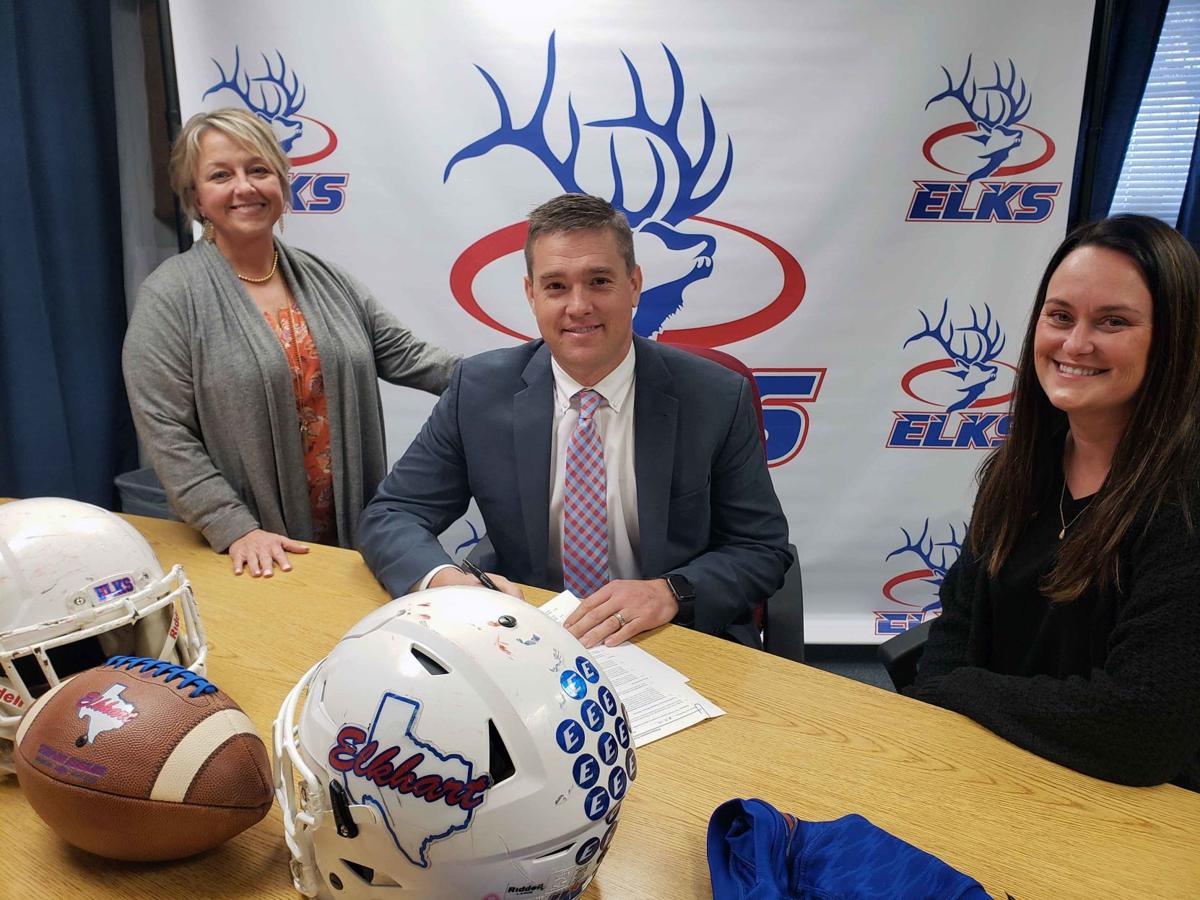 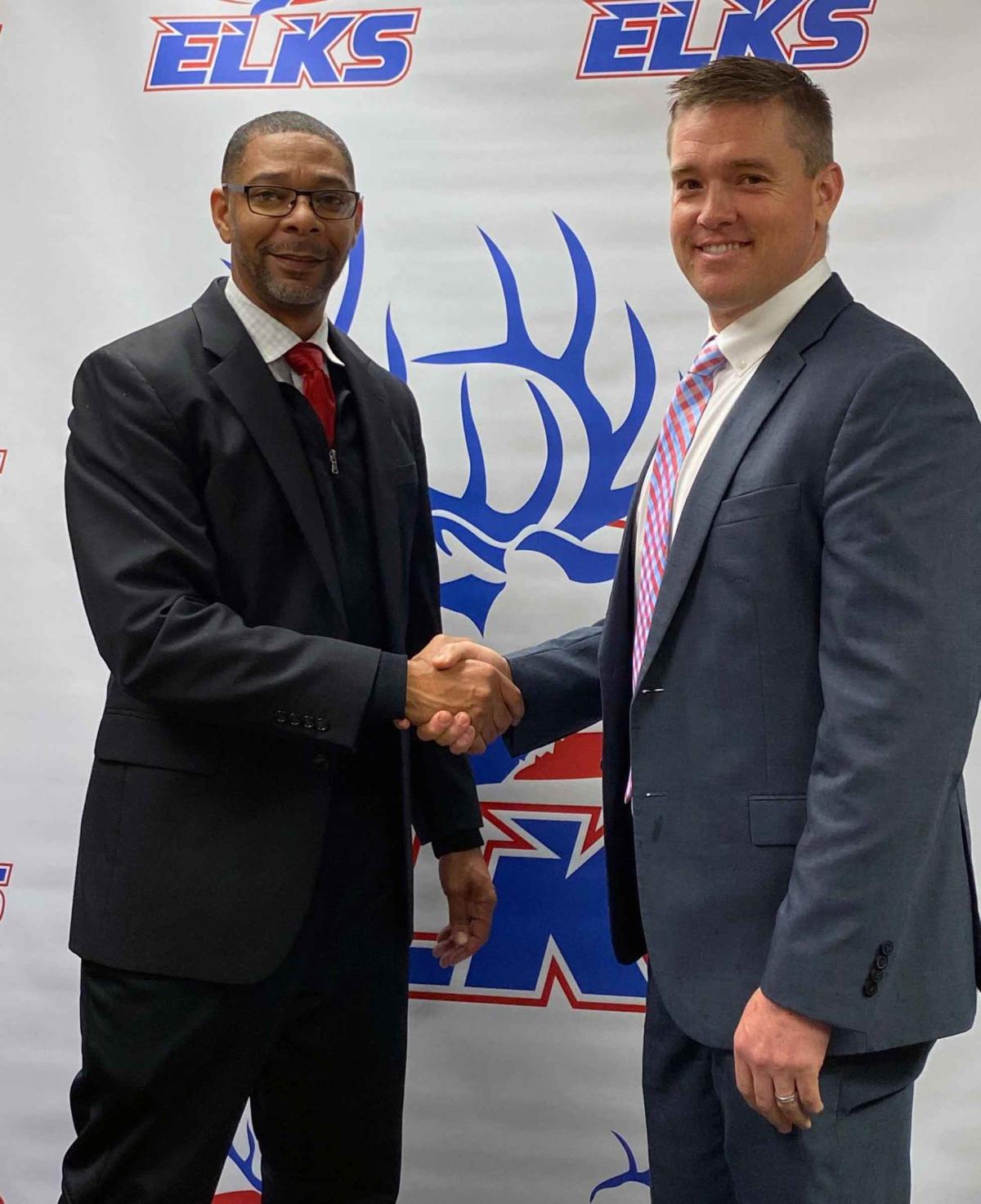 Superintendent Dr. Lamont Smith (left) and newly-hired Elkhart Athletic Director Luke Goode stand together after he was announced as the new AD.

Superintendent Dr. Lamont Smith (left) and newly-hired Elkhart Athletic Director Luke Goode stand together after he was announced as the new AD.

Elkhart Independent School District announced Wednesday the official hiring of Luke Goode as the new Elkhart Athletic Director and Head Football Coach. Goode was approved as the new head football coach and AD following the departure of coach Jason Fiacco who accepted the role of Athletic Director of Cleveland ISD on Jan. 10.

Most recently, Goode was the offensive coordinator at Mesquite Poteet High School for his second go-round with the Pirates and has worked in Lufkin ISD and Lone Oak.

“I'm a small-town guy,” Goode said. “I enjoy seeing kids do multiple sports and being in a one-horse town where the whole community is there for just that school. That's why I'm excited to be here in Elkhart and be an Elk.”

Goode beat out nearly 100 applicants who all applied to become the next AD at Elkhart. Before his one-year tenure at Mesquite Poteet, Goode spent seven years with his hometown school of Lone Oak. He served as the district’s head football coach and athletic director since 2015.

Goode is a graduate of Stephen F. Austin State University and helped flipped the Mesquite Poteet program around during his first tenure there in 2010.

Under head coach Randy Jackson, he was apart of turning their program from a 1-19 football team to a 12-3 squad who fell to Aledo, 29-27, during the semi-finals round.

“Winning is a byproduct of the things we do off the field,” Goode said. “Raising young women and men that have great character and grades is why we're here at school first. Athletics is just transportation to get us there.”

He also served five years at Lufkin under head coach John Outlaw who served as a father figure for a young coach and taught him the importance of family first. That approach is a premium coach Goode looks to continue with Elkhart.

Now that the weight of finding his destination has been lifted off his shoulders, Goode is excited to welcome the challenge of continuing to build a successful program at Elkhart. His “one day at a time” approach hopes to be a model and a road map for the goals he wants his athletes to reach.

“We wanted someone who had a strong ability to lead and hold himself to high standards,” superintendent Dr. Lamont Smith said. “I wanted someone who I felt comfortable with loving and pushing these kids to win. But also someone who believed in character education and has strong family values.”

Coach Goode's calm, intelligent and focused demeanor were the highlights Dr. Smith noted upon first meeting him. Coming into the interview that way led Dr. Smith to believe he would function that way with Elkhart.

Outside of the on-field/court product, Dr. Smith expects to see a Goode establish a “culture of excellence.”

“Our expectations are always to be better than last year.” Dr. Smith said. “It's not just football. I want him to encouraging our girls. We want to push our girls towards excellence in volleyball, basketball and in the tennis area too. Supporting our middle school programs too. I want kids to love participating and believe they can excel.”

Coach Goode's official start day with Elkhart will be March 2.