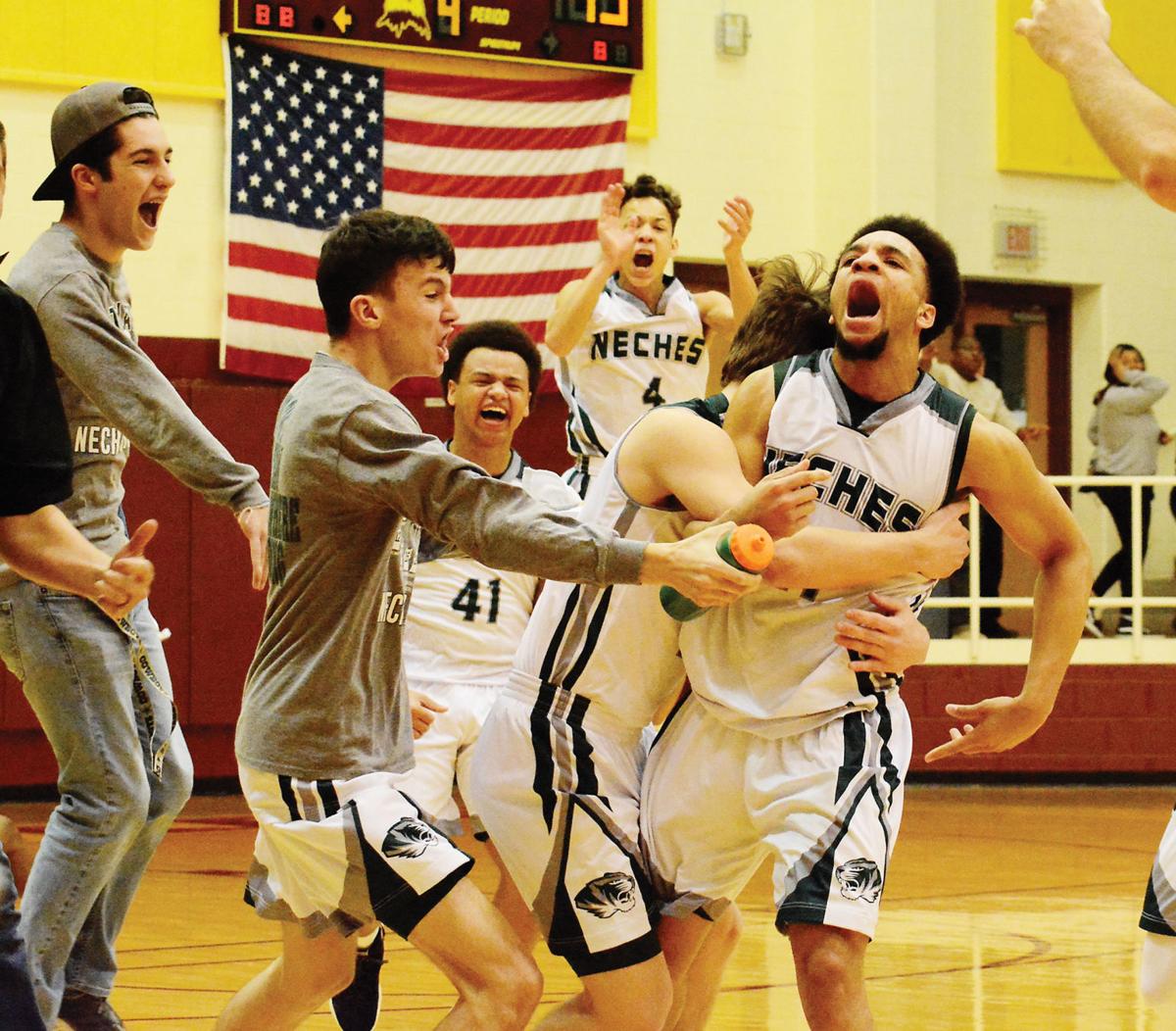 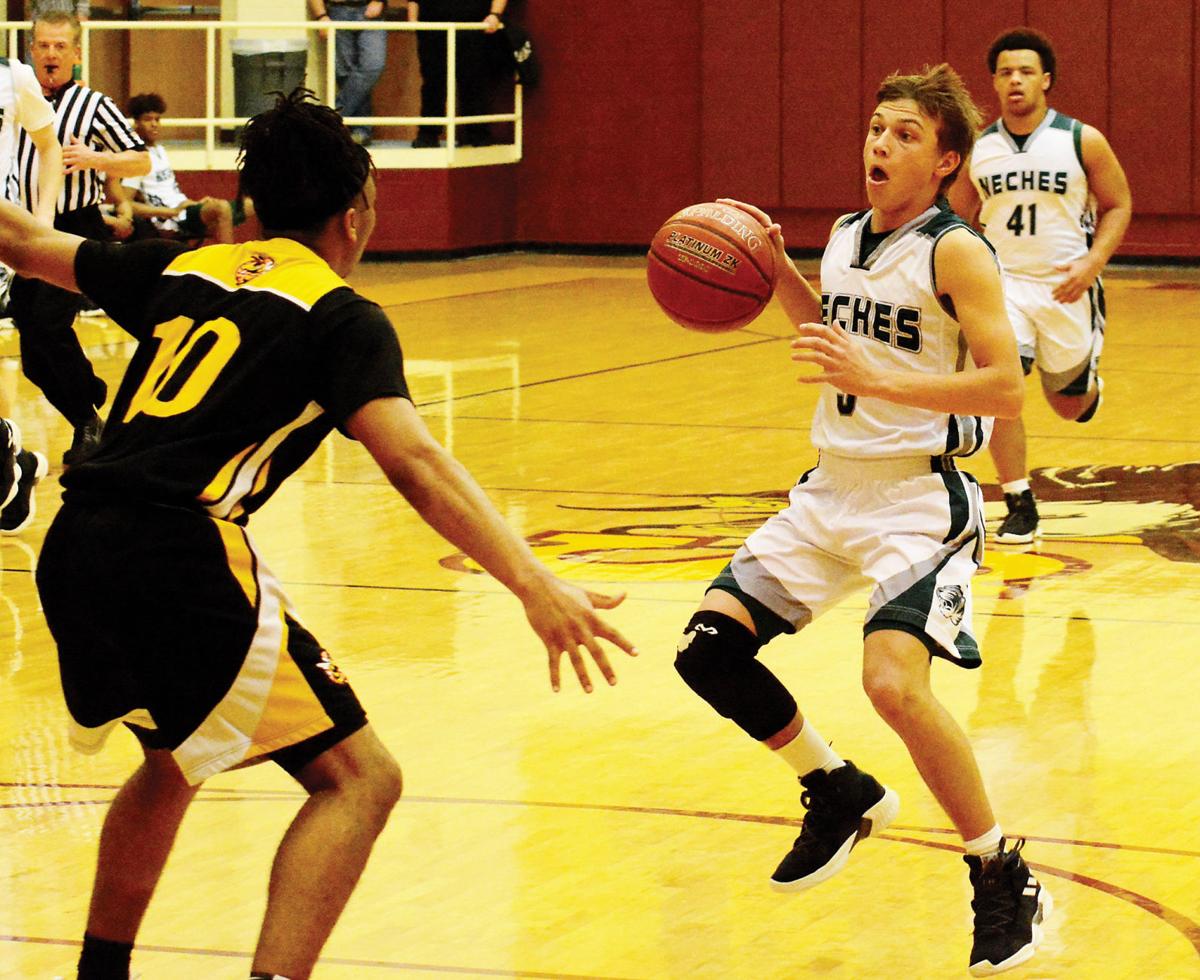 Neches point guard John Snider attempts to fake out the Coolidge defense during a Conference 1A-Region IV quarterfinal game on Tuesday in Fairfield. 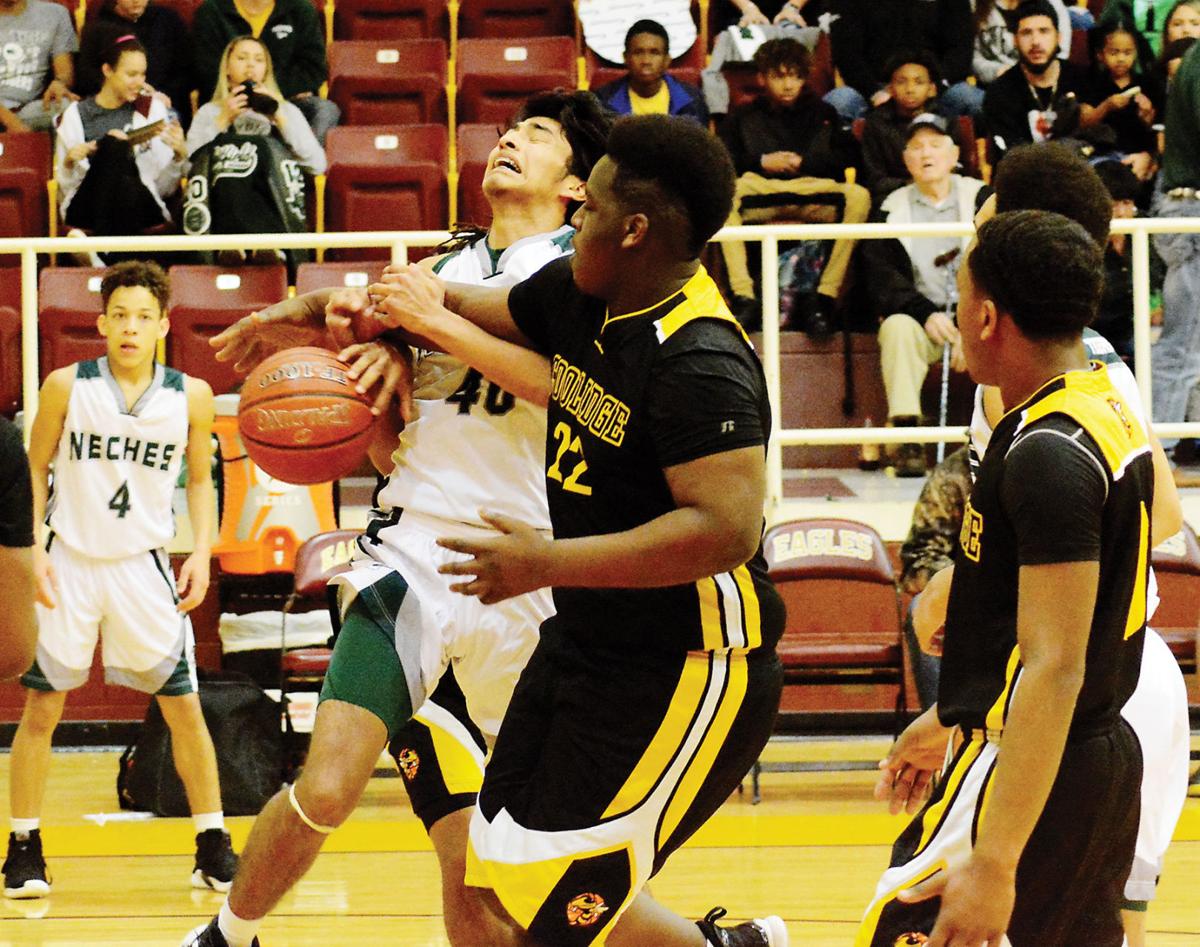 Neches' Carlos Quistian grimaces after he's stripped of the ball by Coolidge's Roderick Busby on Tuesday in a Conference 1A-Region IV quarterfinal game at Fairfield.

Neches point guard John Snider attempts to fake out the Coolidge defense during a Conference 1A-Region IV quarterfinal game on Tuesday in Fairfield.

Neches' Carlos Quistian grimaces after he's stripped of the ball by Coolidge's Roderick Busby on Tuesday in a Conference 1A-Region IV quarterfinal game at Fairfield.

FAIRFIELD — Neches High School's game-winning shot on Tuesday wasn't quite exactly how it was drawn up.

Neches head coach Randy Snider called a timeout with 3.7 seconds left — moments after Coolidge's Torrey Hoover knotted the score at 45-all with a running layup inside the lane.

Snider said the plan was for Bryant Kincade to dribble up court as quickly as possible and feed Carlos Quistian in the lane for the game-winner.

“We were looking for Carlos underneath, or another one of our shooters in the corner,” Snider said.

Kincade sent a short chest pass to Barrett, who leaped into the air and hoisted a hopeful shot.

Barrett's running 3-point attempt banked off the glass with a thud, and down through the basket — giving Neches the win 48-45 in the Conference 1A-Region IV quarterfinals at Johnson Activity Center.

Neches' players understandably reacted with euphoria, and Barrett looked up at Neches' fans while nudging the scorer's table.

“It was a big win for our boys,” Snider said. “We have been striving to get here to the regional tournament for a long time.”

Neches improved to 24-12, and the Tigers will face Leggett in the 1A-Region IV semifinals at 8 p.m. on Friday at Toney Burger Gymnasium in Austin.

The game will feature two teams ranked in the Texas Association of Basketball Coaches 1A poll, with Neches No. 5 and Leggett (24-8) No. 22.

Neches didn't play particularly well at the onset, down by as many as seven points twice during the second quarter after a Skyler Hayes layup with 5:17 left in the second quarter (16-9) and Hoover shot inside the paint, 20-13 — which was the score at intermission.

Jase Kincade scored inside to give Neches a 37-32 lead with 5:50 to go in the fourth quarter — the Tigers' largest bulge of the contest.

Coolidge scored on back-to-back possessions, including a Colton Carter layup — which set up Barrett's game-winning heroics.

Barrett finished the game with 25 points, including three 3-pointers and 5-of-8 from the free-throw line. Quistian added 17 points.

Personal fouls: Coolidge 18, Neches 15; Fouled out: None; Technical fouls: None

Funeral services will be Thursday, April 2, 2020 @ 11:00 a.m. at True Vine DOXA Center, Fairfield, Texas 75840 Pastor and Eulogist, Rev. Michael Daniels. Burial will be at the Fairfield Baptist Cemetery, Fairfield, Texas. Irma Thomas passed away March 26,2020 in Conroe, Texas at the age of 5…