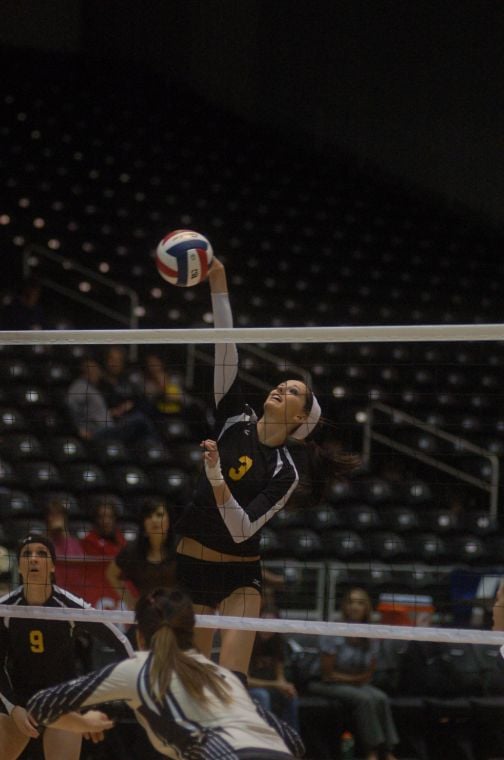 Cayuga junior Danielle Anderson spikes a ball against Round Top-Carmine during the state semifinals Friday at the Curtis Culwell Center in Garland. The Ladycats fell to the Cubettes, 3-1, in the match. 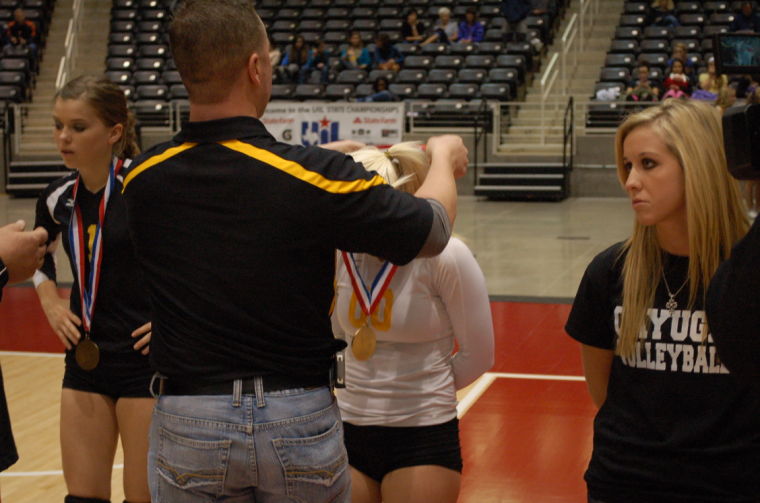 Cayuga junior Danielle Anderson spikes a ball against Round Top-Carmine during the state semifinals Friday at the Curtis Culwell Center in Garland. The Ladycats fell to the Cubettes, 3-1, in the match.

Coming for its third-straight trip to the state volleyball tournament, the Cayuga volleyball team wanted to compete, to show it belonged.

Yes, the Ladycats wanted to win a state title and that was the ultimate goal. But, after two disappointing showings in their previous two trips, if a state title couldn’t happen, then Cayuga wanted to at least be in whichever match it lost.

The Ladycats got their wish, storming back from a 2-0 deficit to force a Game 4, and three times having a chance to force a Game 5 in their state semifinal here at the Curtis Culwell Center against Round Top-Carmine.

“We competed, something that we haven’t done the last two times down here,” CHS coach Magen Humphreys said after the match. “That was important to us. I think the girls competed. There’s nothing that we could’ve really done differently, I don’t think.

“Just sometimes, the ball falls your way and sometimes it doesn’t.”

A mixture of Carmine’s effective offense and mistakes by the Ladycats put Cayuga into the 2-0 hole, and the Cubettes threatened to end the match early in Game 3, multiple times jumping out leads that could’ve forced Cayuga to wilt.

The Ladycats never did, and behind the play of senior star Shawnta Knox, kept answering every Carmine run with a run of their own.

It reflected a change in philosophy for Cayuga, who changed up game plans after the first two games.

“We had a game plan coming in and our game plan didn’t work real well for us,” Humphreys said. “We just went with what we know, what we were comfortable with, and they answered back with that.

Cayuga eventually was able to distance itself from the Cubettes in Game 3 thanks to Knox and Jana Walthall.

After a Knox kill made it 22-21, Walthall added her own to extend the Cayuga lead. The duo then teamed up for a block, and Knox finished off the game with yet another kill, one of her team-high 22.

“The first two games seemed really, really iffy,” Knox said. “We seemed out of it, we weren’t ourselves. But, after that, that was the Cayuga Ladycats. We fought for every single point and put our hearts on the floor. That’s what I wanted us to prove.”

Cayuga carried that momentum into Game 4, and quickly took an 8-4 lead, an advantage it extended to 10-5 before Carmine, behind senior Emily Noak, started to claw back in.

Over a 7-2 Cubette run, Noak had two kills and an ace, and Carmine took advantage of some bad serve-receive from Cayuga to tie the game up at 12. From there, the battle of attrition began.

Every time Cayuga went on a run, Carmine answered, and vice versa.

Cubette star Megan Hohlt — a star as a freshman on Carmine’s 2010 state title team — gave her team a 14-13 edge with a kill, only to see Danielle Anderson answer right back for Cayuga.

A kill and an ace from Brittany Hohlt made it 16-15 Carmine, but Anderson again answered with two kills sandwiched around a kill from Mary Davis to make it 18-16 Cayuga.

Anderson’s second kill in that span ended a thrilling rally, one that saw each side make diving dig after dig to somehow keep play alive.

Not to be outdone, Megan Hohlt and Carmine answered with their own 3-0 run, with Hohlt adding a kill and an ace to make it 19-18.

Once again, however, Anderson and Cayuga answered when the junior middle blocker sent a kill dangerously close to the line. Officials originally called the ball out before reversing the call and giving Cayuga the tying point.

The two teams then traded points until the game was tied at 22, when Knox landed a kill and Carmine sent a kill into the net to give Cayuga its first game-point opportunity.

But, Cayuga was called for a net violation on the next play to make it 24-23, and Brittany Hohlt came up with a big kill to tie things up at 24.

Anderson answered right back with yet another kill, one of six in Game 4 alone for her, to make it 25-24 Cayuga and again give the Ladycats a game-point.

Unfortunately, that would be the last points Cayuga would score.

Cayuga had its next kill attempt go out-of-bounds, and was then called for a double-hit to make it 26-25 Carmine.

Brittany Hohlt served for the match, and placed the ball perfectly between Cayuga’s front and back row for the win-sealing ace.

“We came close to getting that fourth set,” senior setter Molly Griffey said. “We fought for every point, it just didn’t go our way.”

Anderson finished with 15 kills for Cayuga, while Davis added five. Griffey had four to go along with her 40 assists and nine digs.

Cory McCulloch had a match-high 18 digs, while Presley Luce had 12 and Knox added seven. Maci Poland had six.

With the loss came the end of the Cayuga careers of Griffey, Knox, Reann Richards and Meagan Poland.

Griffey, Knox and Richards all played on all three state tournament teams — the first trips in school history — and never lost a district match in their playing careers.

“It’s something we’ll never forget,” Richards said after the match. “We definitely made history at our school, and that’s always a good thing. We didn’t get our ultimate goal, but we showed a lot of people what we were made of.”

Carmine moves on to face Leon in the state championship match at 9 a.m. today. Leon defeated Wink, 3-1, in the first semifinal Friday.