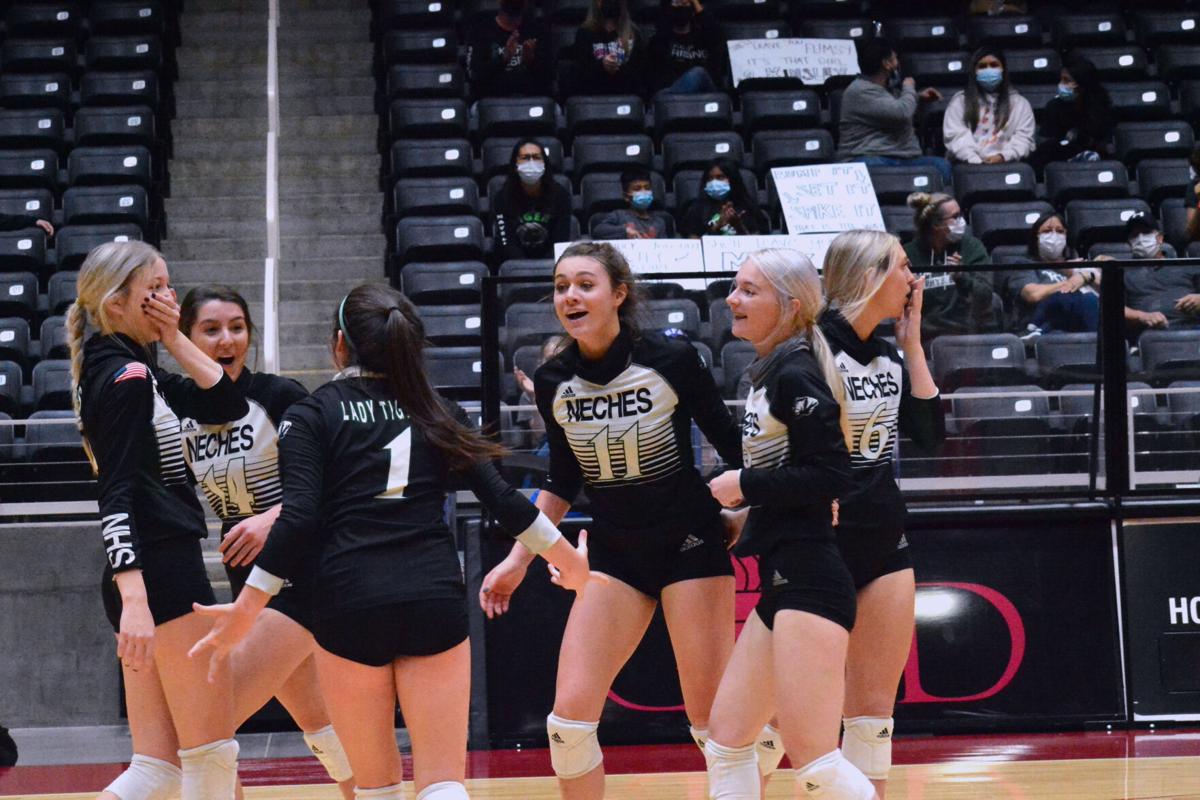 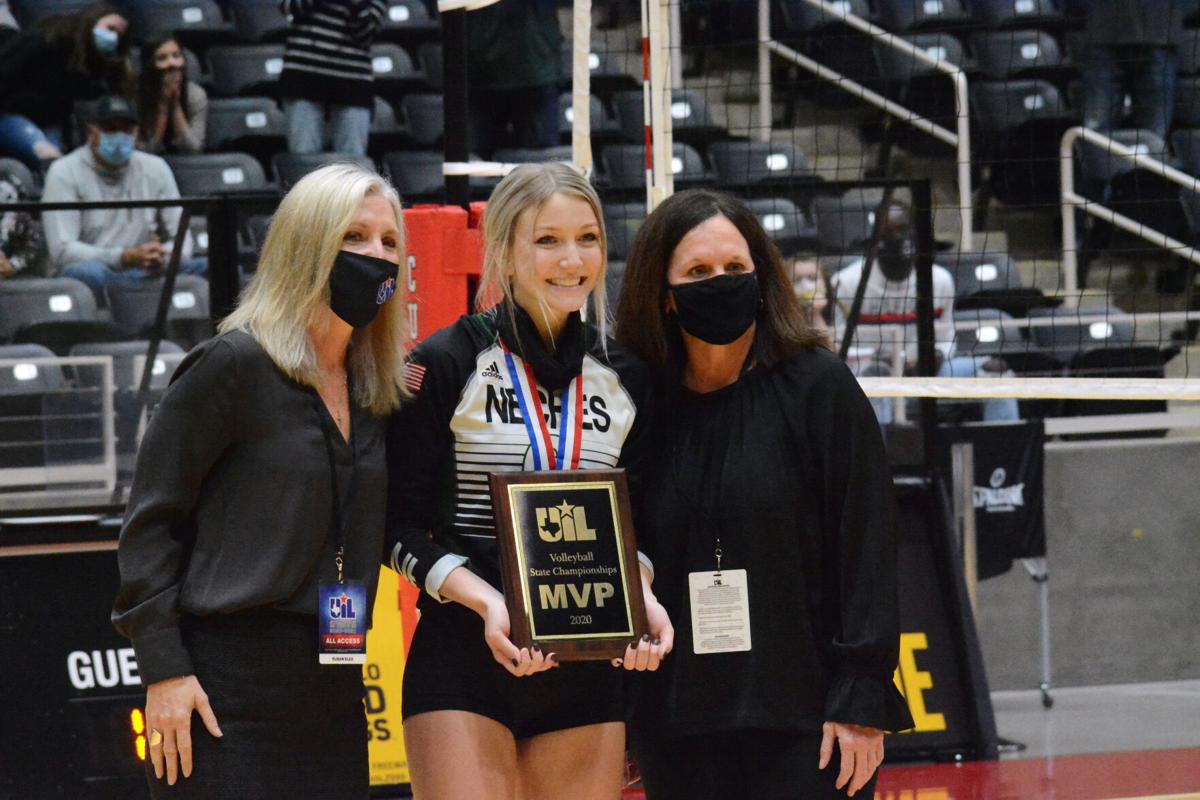 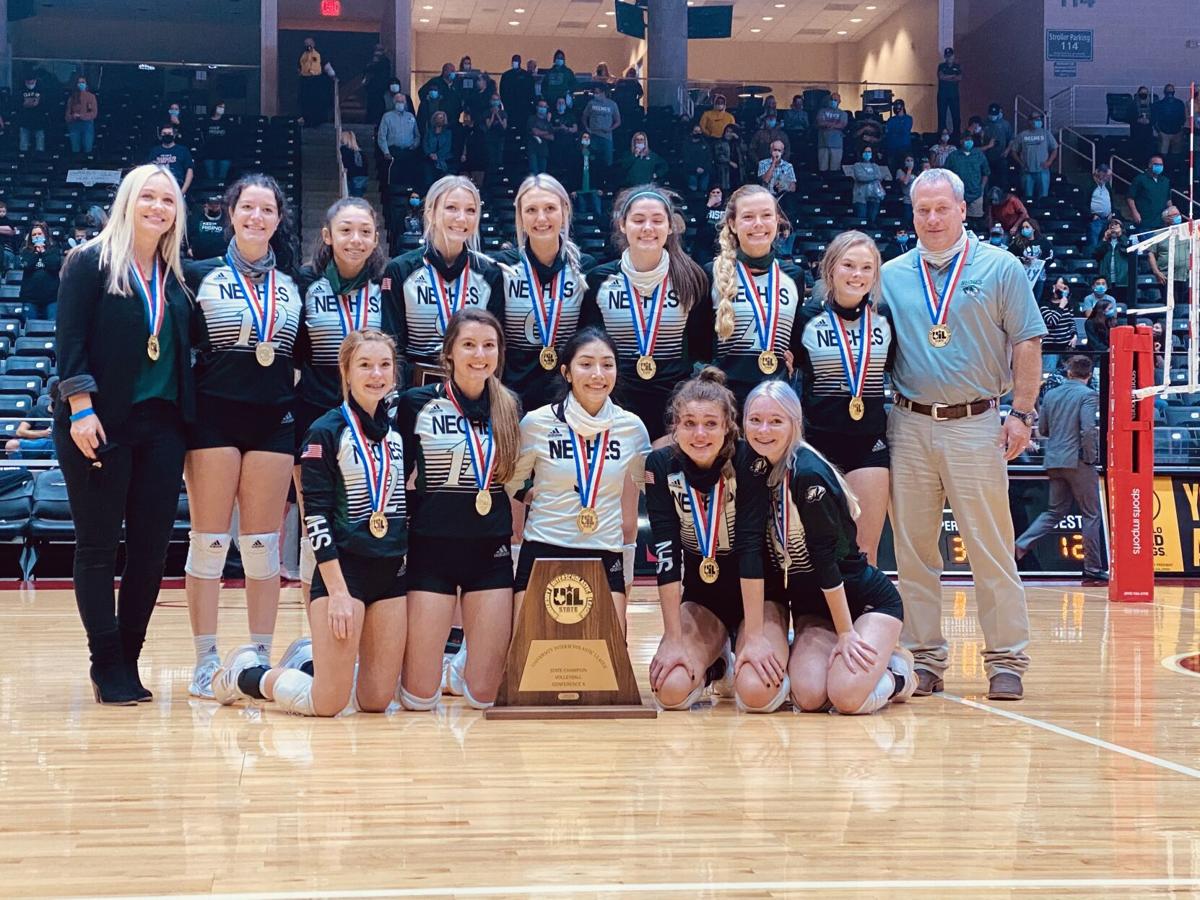 The Neches Lady Tigers completed the trifecta Saturday morning after claiming a atraight set 25-20, 25-19, 25-12 victory over the Blum Ladycats for the Class 1A state championship at Garland’s Culwell Center.

The Neches Lady Tigers completed the trifecta Saturday morning after claiming a atraight set 25-20, 25-19, 25-12 victory over the Blum Ladycats for the Class 1A state championship at Garland’s Culwell Center.

GARLAND – The Neches Lady Tigers completed the trifecta Saturday morning after claiming a atraight set 25-20, 25-19, 25-12 victory over the Blum Ladycats for the Class 1A state championship at Garland’s Culwell Center.

“This feels amazing,” head coach Jenna Jenkins said. “I’m so thankful for this group of girls. Thankful we even got to play this season with all this craziness of COVID going on. It’s an amazing feeling.”

The Lady Tigers eliminated Blum (30-6) from the state tournament in the semifinals in 2019 and it was apparent early the Ladycats brought that memory with them Saturday.

Neches commenced to go on a 4-0 run that forced Blum to burn a timeout. The Lady Tigers scored the next two points out of the timeout, but Blum was able to battle back within a point at 18-17 – forcing Neches to burn a timeout.

“I felt like my kids weren’t following the game plan we established going into it,” Jenkins said. “We had trouble getting into a rhythm the whole first set and half. Blum did a good job of keeping us off balanced.”

The Lady Tigers shook back following the brief break and Kimbrough closed the set out with a service ace.

Blum was off to another strong start in the second set racing out to a 7-4 lead then a 13-9 lead that led Jenkins to burn two early timeouts.

Neches left the huddle determined to snatch momentum as they went on a 9-1 run.

“We weren’t playing as a team,” senior Lexi Rogers said. “We were tense and that leads to bad play. We just needed to lighten up a little bit and play our game.”

Rogers nailed home two kills down the stretch to get Neches to a 25-19 set win.

Offensive momentum stayed with Neches in the third set as they opened up a 5-0 lead. Blum battled back to cut it to 10-8 before the Lady Tigers an 8-1 run.

The damage had been down as Neches stared down a third title. A pair of kills from Lexi Rogers and kills from Kimbrough, Raegan Hill and Emily Docteur put the final set away as the Lady Tigers clinched their third consecutive title.

“It was overwhelming to get this in my senior year,” Rogers said. “It still hasn’t hit me that this was my final game. It feels like we have volleyball practice tomorrow. I love this team.”

The Lady Tigers finish 29-4 on the season.

It is with heavy hearts Dustin, Katie and myself invite you to a Memorial Celebration for my husband Rick Stuffers from 4 p.m. to 7 p.m. Tuesday, Dec. 1 at the Ben E. Keith Hospitality Room, 2019 West Oak St. in Palestine. Rick passed away on Thursday, Nov. 19, 2020. In lieu of flowers, memo…